This indicator is used to assess progress against the target relevant for imposex in gastropods set out in the Marine Strategy Part One (HM Government, 2012), which requires that adverse effects due to contaminant exposure are below agreed OSPAR Environmental Assessment Criteria. Meeting this Criteria for imposex in gastropods protects the marine environment from significant impacts due to the anti-foulant biocide tributyltin.

The key pressure associated with this indicator is the widespread use of tributyltin-based anti-fouling paints before 2008 to prevent the growth of marine organisms on ships and marine structures. Due to its high persistence, tributyltin remains in marine sediments. Tributyltin can cause imposex in marine molluscs resulting in reduced reproductive performance. This pressure has reduced significantly in recent years.

Bans on the use of tributyltin anti-foulants on boats less than 25 meters long started in the 1980s, and a global ban for all ships came into effect in 2008, when stringent European Environmental Quality Standards (European Commission, 2008) for water quality were also published. Robust controls on dredging and spoil disposal have also reduced risks from tributyltin. However, most of the tributyltin entered the sea before many of these controls were put in place and due to its persistence, it is still present. Removing contaminated sediments from the sea is not considered to be a practicable option.

Status and trend assessments were conducted for the UK-portion of the Greater North Sea and Celtic Seas Marine Strategy Framework Directive sub-regions, and at the smaller scale of the 8 UK biogeographic marine regions set out in Charting Progress 2 (UKMMAS, 2010).

Environmental Assessment Criteria for imposex measurements in a variety of gastropods have been developed by OSPAR to assess whether significant harm is occurring. OSPAR also has an aspirational ultimate objective to achieve close to background levels of effect and has developed Background Assessment Criteria related to imposex. Whilst not a target described in the UK Marine Strategy Part One (HM Government, 2012) this assessment also examines progress towards this objective.

In the UK Marine Strategy Part One (HM Government, 2012), we reported that there had been a fall in the severity of imposex in dog whelks in some areas based on the evidence in the Charting Progress 2 Feeder Report on Clean and Safe Seas (UKMMAS, 2010b).

A trend assessment of the 110 stations sampled shows improvements in the UK Greater North Sea and Celtic Seas (Figure 3). All six assessed regions showed significant downward trends. At the individual station level, not a single station showed significant upward trends (Figure 3), indicating that the measures introduced by the UK Government and International Maritime Organisation are working. 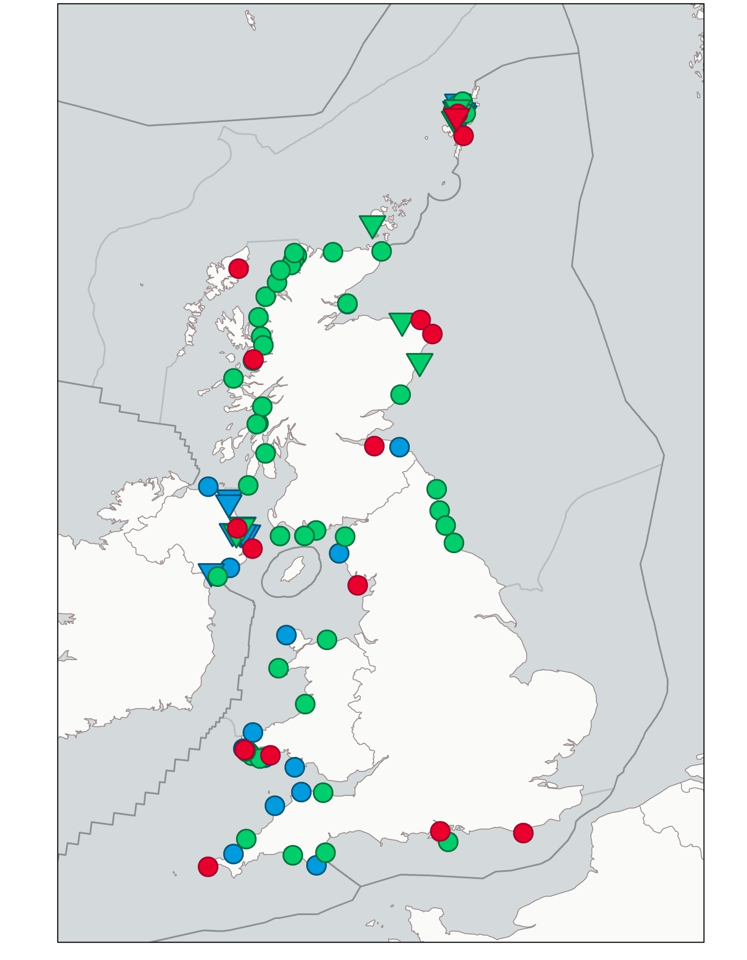 Since the UK Initial Assessment (HM Government, 2012), the levels of imposex in dog whelks have continued to fall. The UK Marine Strategy Part One (HM Government, 2012) target for this indicator has been met in the Celtic Seas (89% of stations) and largely met in the Greater North Sea where 68% of sampling stations exhibit no harmful effects and the severity of the response is decreasing.

It is still unclear why occasional non-compliant samples occur in areas where this would not be expected (suggesting potential illegal use of tributyltin), and experts will investigate such cases so that appropriate action can be taken.