Assessment of progress towards the achievement of Good Environmental Status for eutrophication.

The UK has largely achieved its aim of Good Environmental Status for eutrophication. A small number of eutrophication problems remain in coastal and estuarine waters, representing 0.03% of the total UK Exclusive Economic Zone, and 0.41% of estuarine and coastal waters.

In the Marine Strategy Part One (HM Government, 2012), the UK set out the following “Characteristics of Good Environmental Status” for Eutrophication:

Human-induced eutrophication in UK seas is minimised and all UK marine waters are ‘non-problem areas’, where:

Based on our knowledge of the eutrophication status of UK marine waters, from the initial assessment of the eutrophication status of UK seas in 2012 (HM Government, 2012) and previous assessments, linked targets were set for the acceptable conditions of nutrient levels, chlorophyll, phytoplankton, macroalgae, oxygen and oxygen-related effects. The linked targets were different for the eutrophication ‘problem areas’ and ‘non-problem areas’ identified in the initial assessment reflecting the different risks. It was also stipulated that the targets must be considered holistically and that the overall goal is to ensure no undesirable disturbance. Failure to meet an individual target does not necessarily signify a eutrophication problem.

Step 3: We carried out the assessment of targets

We worked with OSPAR countries to produce the “Third OSPAR Integrated Report on the Eutrophication Status of the OSPAR Maritime Area, 2006-2014” (OSPAR Commission, 2017) which includes an assessment of the eutrophication status of UK waters. This assessment uses the common methodology set out in the OSPAR Common Procedure for the Identification of Eutrophication Status (OSPAR Commission, 2013) through which the Contracting Parties apply harmonised criteria of nutrient inputs, nutrient concentrations, chlorophyll concentrations, phytoplankton indicator species, macrophytes, dissolved oxygen levels, incidence of fish mortality events and changes in zoobenthos. It also includes an integration step which considers all these criteria to judge whether eutrophication has occurred. At the same time, we set up four OSPAR common indicators which the UK has used to contribute to an assessment of progress towards achieving our targets and characteristics of Good Environmental Status with an emphasis on trends for nutrient concentrations and chlorophyll.

The UK report submitted to OSPAR to was used to assess the eutrophication status in the Celtic Seas and the Greater North Sea. The UK contribution to this OSPAR initiative involved the submission of a UK national report (Painting and others, 2016) which shows, amongst other things, how the findings of the four UK indicator assessments are integrated using the principles of the OSPAR Common Procedure to show if eutrophication effects are occurring in UK seas. It also provides details of the assessment method and maps of the assessment results which show where the small number of problem areas are located.

This involves further refining the UK targets, and ongoing evaluation of the UK indicators.

The initial assessment in 2012 (HM Government, 2012) reported relatively few eutrophication problem areas in UK waters, and that these were only found in coastal and transitional waters. Since then, the number of problem areas has decreased (from 23 to 21) and the number of potential problem areas has increased (from 6 to 11). This results from the continued development of surveillance, monitoring and assessments being undertaken for transitional and coastal waters. Some water bodies are showing signs of improvement from problem area to potential problem area. Changes in nitrogen and phosphorus inputs, concentrations of contaminants, chlorophyll concentrations and oxygen levels generally show improvements. 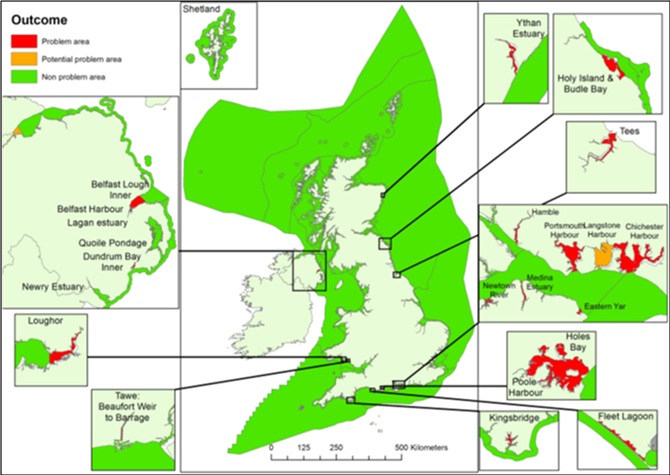 Part three of the UK Marine Strategy (HM Government, 2015) detailed an extensive programme of measures, designed to record and manage human activities that might have adverse effects on marine ecosystems and animals. The main vehicle for implementing a broad range of measures are the River Basin Management Plans developed under the Water Framework Directive (European Commission, 2000). These aim to achieve the objectives for specific water bodies, particularly where high nitrogen concentrations have resulted in the classification of ‘moderate status’ and an additional assessment of the biological quality indicates that measures to tackle eutrophication are necessary.

The measures taken to reduce nutrient pollution and eutrophication problems in the last decades (for example under the Urban Waste Water Treatment, Nitrates, Habitats and Birds Directives and covered by Water Framework Directive River Basement Management Plans (European Commission, 1991a, 1991b, 1992, 2000, 2009) appear to be leading to beneficial change to the areas at risk in the marine environment. The full effect of these measures takes a long time to result in the desired outcome due to time lags between taking measures and change in the large reservoirs of nitrogen that have built up in soils and ground-waters in previous decades.

The use of remote smart buoys in key locations to track concentrations of nutrients and chlorophyll has led to greater monitoring efficiencies and more robust real-time results which give a much better picture of how these indicators are changing during the growing season. Remote sensing of chlorophyll using satellites has enabled a near-quantitative estimation of chlorophyll concentrations in real time, which has led to a much better appreciation of the risks of eutrophication occurring in specific areas.

There are no major outstanding issues for eutrophication, but the impact of a changing climate will need to be considered in future assessments.

There has been no increase in the concentration of dissolved inorganic nitrogen in the coastal and offshore waters of the Greater North Sea and Celtic Seas since 1990. Significant decreases have been observed in coastal waters in both regions. UK targets for nutrient concentrations in the sea have been met.

In UK marine waters of the Greater North Sea and the Celtic Seas, dissolved oxygen concentrations are above levels required for healthy marine ecosystems. 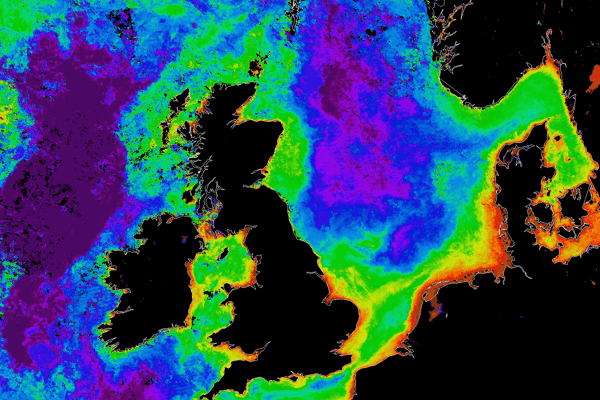 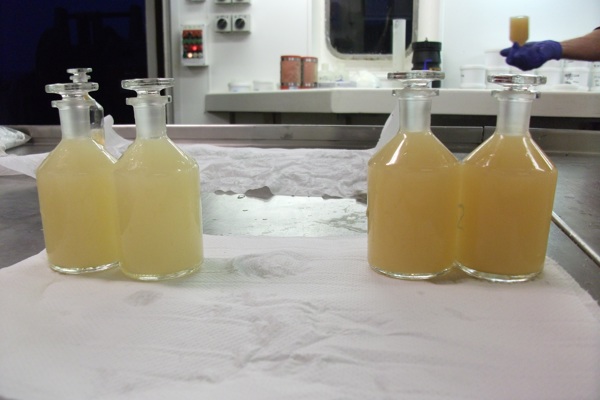 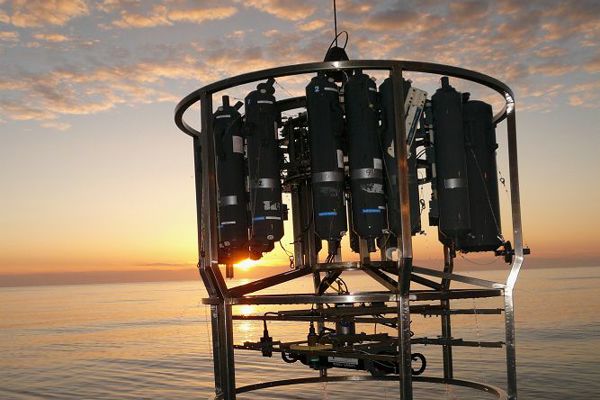 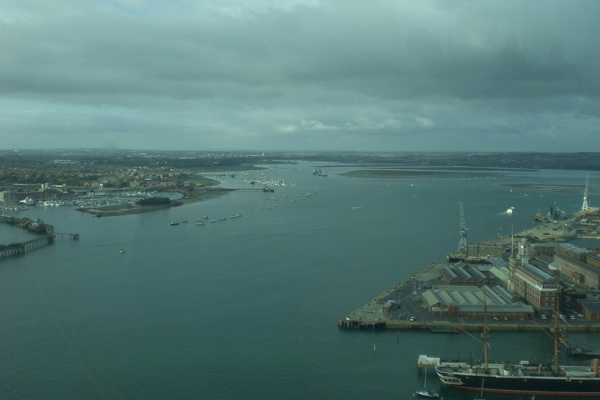 The eutrophication assessment is based the following four OSPAR common indicators which were developed through sharing of data from the OSPAR contracting parties (OSPAR Commission, 2017).

Seeing that eutrophication is only a problem in a few small areas in coastal waters, we will focus on implementing management measures to improve these.