In the UK Initial Assessment (HM Government, 2012) the key pressures associated with this indicator were riverine and direct inputs of nutrients (nitrogen and phosphorus) from various sources and atmospheric deposition. These are still relevant but, considering that the small number of eutrophication problem areas are generally limited to coastal waters, estuaries and embayments, the key pressures are likely to be from local (catchment related) agriculture and wastewater treatment.

The UK Marine Strategy Part Three (HM Government, 2015) describes the robust UK legislative framework for controlling and reducing discharges, emissions and losses of nutrients from sources affecting specific eutrophication problem areas. Measures include Water Framework Directive River Basin Management Plans  (European Commission, 2000) which are particularly relevant for UK problem areas in coastal waters. There are improvements in some of the areas where measures are in place but it can take many years for measures to reduce nutrient loads and to improve the issues related to eutrophication.

Trend assessments were conducted for UK inputs to the Greater North Sea and Celtic Seas Marine Strategy Framework Directive sub-regions. Assessments were also carried out at the smaller scale of the eight UK biogeographic marine regions set out in Charting Progress 2 (Defra, 2010) and by river catchment areas. Atmospheric loads were not assessed but, estimates for the whole of the Greater North Sea can be found in the OSPAR Intermediate Assessment 2017 (OSPAR Commission, 2017).

The initial assessment (HM Government, 2012) reported that over time, inputs of nutrients to the marine environment were generally decreasing and that eutrophication problems in UK seas were restricted to a small number of estuaries, embayments and coastal waters.

There is no status assessment for this nutrient input indicator as assessment thresholds have not been set.

Trends have been assessed for this indicator. This is in line with the regional approach in the OSPAR Intermediate Assessment (OSPAR Commission, 2017).

Total waterborne nitrogen input (1990 to 2014) shows no trend in the Greater North Sea and a significant reduction in the Celtic Seas (Figure 3). Inputs to both regions are dominated by riverine inputs reflecting diffuse sources. Total waterborne phosphorus inputs show significant reductions in both the Greater North Sea and Celtic Seas (Figure 3). The main inputs are riverine, reflecting diffuse sources, and direct sewage sources. 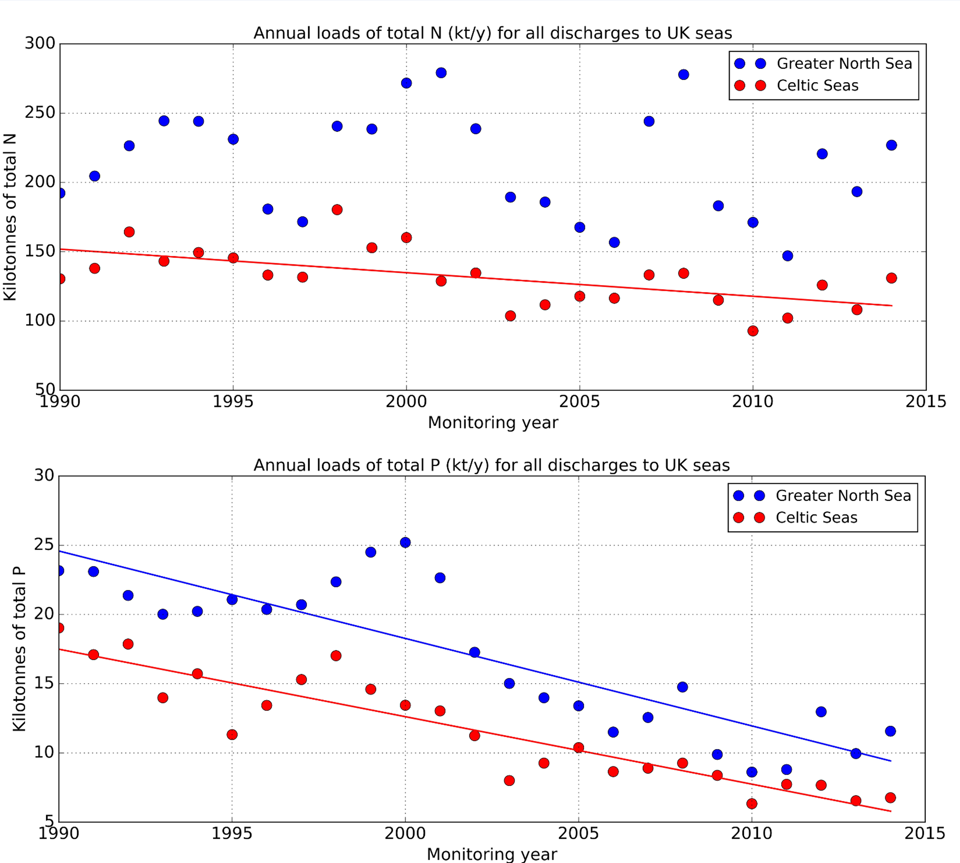 Figure 3. Trends in total inputs of nitrogen (N, kt y-1) and phosphorus (P, kt y-1) to the Greater North Sea and Celtic Seas. Trendlines are shown only where trends are significant using Mann-Kendall analysis. Inputs were not adjusted for water flow rates and riverine contributions may be higher in years with more rainfall.

Overall confidence in the assessment methodology and in the data is moderate (see also OSPAR Commission, 2017). Confidence in results is reduced when analysis is performed at smaller spatial scales due to associated reduced amount of data available.

Inputs of total nitrogen via waterborne sources show no trends in the Greater North Sea and significant reductions in the Celtic Seas. In both regions, the dominant inputs of nitrogen are via rivers, which show no trends in inputs since 1990. Nitrogen inputs from industry and sewage sources have reduced but, in the Greater North Sea, these reductions do not influence total inputs of nitrogen.

Measures are in place to reduce nutrient inputs to areas identified as eutrophication problem areas. Reduced nutrient inputs to the UK-portion of the Greater North Sea and Celtic Seas contribute to the achievement of the UK targets for nutrient concentrations in the sea.

This indicator is well developed and there are no major knowledge gaps.

In both the Greater North Sea and Celtic Seas, nitrogen and phosphorus inputs appear to be increasing in several individual catchments. The reason for these apparent increases is unclear and will be subject to further investigation with the national Environment Agencies responsible for measures.