The Marine Protected Area (MPA) network in the UK protects a wide range of marine life, with sites covering nearly a quarter of UK waters and representing the range of habitats and species found across the UK marine environment.

The UK’s marine environment is home to some of the most biologically diverse habitats and species in Europe. MPAs are one of the tools that can help protect the marine environment whilst enabling sustainable use to continue. The UK Joint Administrations Statement (2012) aspires to have an ecologically-coherent, well-managed network which makes an effective contribution to international MPA networks.

The UK Administrations follow several key principles in their development of an ecologically-coherent and well-managed MPA network. These principles were derived from :

Defra, the Welsh Government, the Scottish Government and the Department of Agriculture, Environment and Rural Affairs Northern Ireland have recently reported on progress on the MPA network. As of November 2018, there are 314 designated MPAs protecting 24% of UK waters compared to 217 sites covering 8% of UK waters in 2012. The map in Figure 1 shows the UK coverage.

Figure 1: Map showing the extent of the UK MPA network as of November 2018 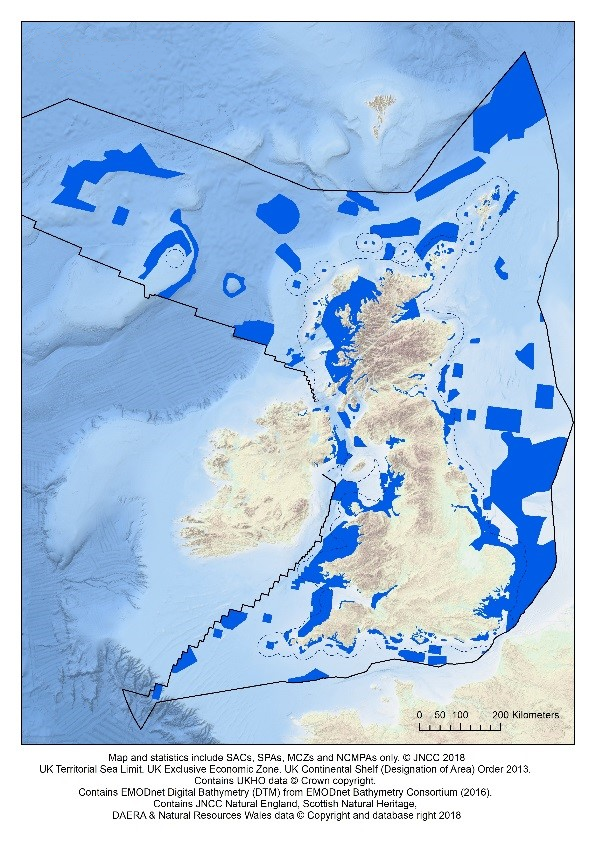 Management measures are being put in place to protect our marine environment. All sites are protected through the licensing and planning process from the point they are consulted on. A risk-based approach to deliver effective management of activities in MPAs has been developed by regulators. Examples of fisheries protection measures include bans on the use of bottom-towed gear and seasonal closures to protect nursery grounds. Fisheries measures for offshore sites are yet to be agreed. In Wales, the MPA Management Steering Group (which comprises representatives of the main management authorities in Wales) has recently agreed and published an MPA Network Management Framework and Action Plan for Wales. These set out MPA management arrangements in Wales and provide a focus on the priority actions to further improve the management and condition of the network of MPAs in Wales.

The proportion of UK waters within MPAs has significantly increased between 2012 and 2018. MPAs across the UK marine area will contribute towards achieving and maintaining Good Environmental Status, in particular Descriptor 1 and Descriptor 6, over the coming years, and to an ecologically coherent and well-managed network of MPAs under the OSPAR Convention.