Assessment of progress towards the achievement of Good Environmental Status for cetacean biodiversity.

Extent to which Good Environmental Status has been achieved

It is unknown if Good Environmental Status has been achieved for other species.

In the UK Marine Strategy Part One (HM Government, 2012), the UK set out the following “Characteristics of Good Environmental Status ” for biodiversity:

“At the scale of the Marine Strategy Framework Directive Sub-Regions, and in line with prevailing conditions, the loss of biodiversity has been halted and, where practicable, restoration is underway:

Marine ecosystems and their constituent species and habitats are not significantly impacted by human activities such that the specific structures and functions for their long-term maintenance exist for the foreseeable future.

Habitats and species identified as requiring protection under existing national or international agreements are conserved effectively through appropriate national or regional mechanisms."

The extent that Good Environmental Status, as articulated in the criteria for biodiversity in the Commission Decision 2010/447/EU (European Commission, 2010), had been achieved was assessed using targets set out for cetaceans in the UK Marine Strategy Part One (HM Government, 2012). The status of each cetacean species was assessed against a target for Population Size. A separate assessment was carried out under the target for Population Condition of the numbers of cetaceans killed through bycatch in fisheries. Indicators relevant to the targets which used data collected by monitoring programmes in the UK and by neighbouring countries were then agreed, in cooperation with OSPAR. With the exception of discrete groups of coastal bottlenose dolphin, the cetaceans found in UK waters are part of much larger populations whose range extends beyond UK waters. The appropriate scale for the assessment of Good Environmental Status for cetaceans is the North East Atlantic, which encompasses the Greater North Sea and Celtic Seas Sub-Regions and wider Atlantic to the west of the UK and Ireland. The status of each species was assessed separately. To achieve Good Environmental Status, the status of all species assessed would need to be consistent with its achievement as articulated for biodiversity (see Figure 1). 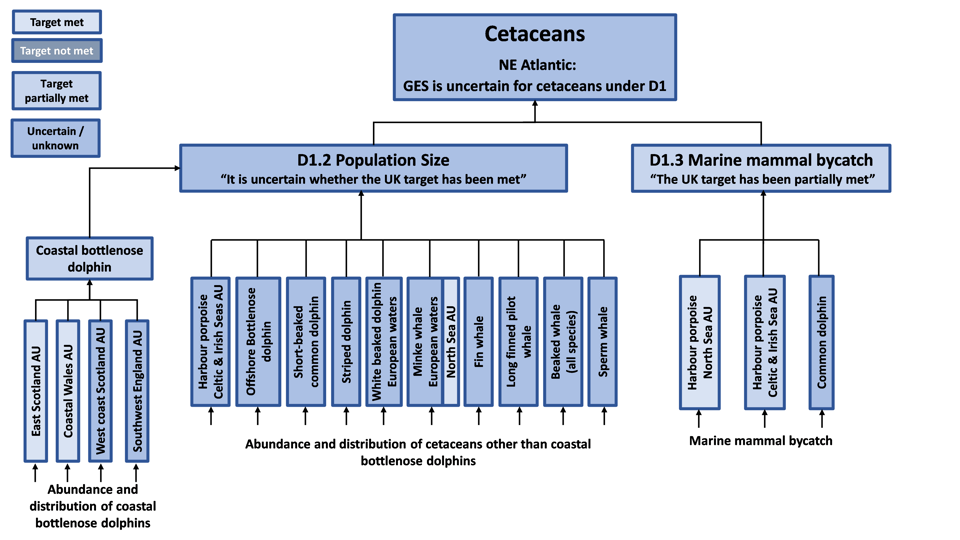 Since 2012, cetacean population estimates have been updated by an international survey. Sufficient data are now available to determine that numbers of minke whale have remained stable in the Greater North Sea over the last 20 years. For most other species the most recent estimates of abundance were similar to or larger than previous estimates made in comparable areas.

There are still insufficient data for most species to assess trends in the Greater North Sea or more widely at the North East Atlantic scale. For most species, abundance has been estimated only once prior to this assessment. Bycatch in fisheries is an ongoing pressure, with harbour porpoise bycatch likely exceeding the precautionary threshold in the Celtic Seas.

Achievement of targets and indicators used to assess progress 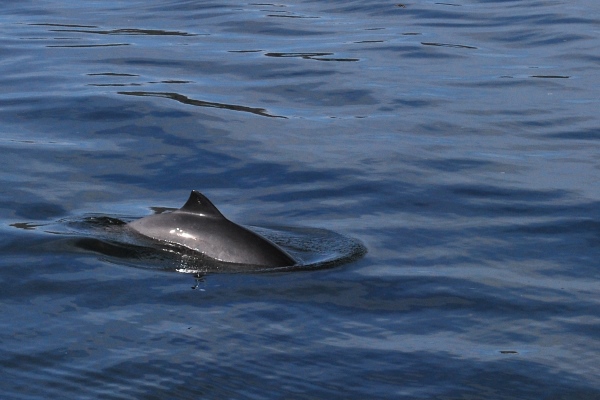 Assessment results are summarized in Table 1. The targets, set out in the UK Marine Strategy Part One (HM Government, 2012) are:

Population size: “in all of the indicators monitored, there should be no statistically significant decrease in abundance of cetaceans caused by human activities.”

Population condition: “mortality of cetaceans due to fishing bycatch is sufficiently low so as not to inhibit population targets being met.”

Table 1. Summary of assessment results and achievement of targets for cetaceans. N.A. indicates not applicable.

We will aim to determine trends in abundance of cetacean species and the impact of human pressures, such as bycatch and noise disturbance, at a North East Atlantic scale to better assess progress against the UK targets.

We will consider increasing the frequency of our SCANS surveys to improve our confidence in our abundance assessments for more species and make better use of citizen science observations.

We will develop a UK cetacean bycatch strategy.

The assessment of abundance for wide-ranging, highly mobile cetacean species requires data collected by equally wide-ranging, internationally coordinated surveys.  The most recent of these was SCANS-III data in 2016. Three precise abundance estimates over at least 10 years, are required to reliably assess trends against the UK targets.  Currently, sufficient data exists for only three species to be assessed against the UK targets and only within the Greater North Sea.  The next step will be to update abundance estimates in the Celtic Seas by incorporating data from a recent survey of Irish waters (when available) with those from UK and French waters surveyed by SCANS III.  This will provide more robust assessments of cetacean abundance in European Atlantic waters and provide an updated abundance estimate for harbour porpoise in the Celtic Seas.  This will enable a more accurate assessment in the Celtic Seas of harbour porpoise bycatch, as proportion of the latest abundance estimate, which is currently based on the 2005 SCANS II estimate.  Future SCANS type surveys will provide additional estimates which will allow trends in abundance to be assessed for more species.

Two of the four groups of coastal bottlenose dolphins that exist in UK waters are well monitored with assessments based on reliable data.  However, such data were lacking to accurately assess the status of the other two groups.  The next step will be to collate available data in order to quantitatively assess the status of the coastal bottlenose dolphin residents in Southwest England.  In waters around the west coast of Scotland, the resident groups are small and difficult to survey using conventional methods. Alternative methods would need to be developed before the size of this group can be determined accurately.

Robust data on population sizes and trends are also required to indicate with confidence if there is a cause-effect relationship between human activities and abundance and distribution.  Determining the impact of human pressures at an appropriate scale is key to assessing progress against the UK target.

One such impact has been assessed here – the extent of bycatch mortality in harbour porpoises. The best available bycatch estimates used in the assessment were provided by ICES.  However, confidence in future assessments would be enhanced by more accurate estimates of bycatch rate and of fishing effort across all relevant fleets.

Measures to protect cetaceans are set out in the UK Marine Strategy Part Three (HM Government, 2015).  These include the monitoring of incidental capture and killing of cetaceans and to ensure that it does not have a significant negative impact on cetacean population size using conservation measures.  European Commission Regulations also require the monitoring of bycatch and the use of acoustic deterrents (‘pingers’) in identified fisheries on vessels of ≥ 12m (European Commission, 2004).  It is anticipated that this will continue.

The initiation of projects such as the Collaborative Oceanography and Monitoring for Protected Species (COMPASS) will help build an understanding of how cetaceans use an area of sea and how they may be impacted by or respond to pressure from human activities.  The COMPASS project has been recently initiated and will build cross-border capacity for effective monitoring and management of Marine Protected Areas (MPAs) through the establishment of a network of oceanographic and acoustic moorings across the regional seas of the Republic of Ireland, Northern Ireland and West Scotland. This network of buoys will enable the effective tracking, modelling and monitoring of aquatic life and the oceanographic processes which influence them.  The variety of habitats that the array covers will create a highly informative and varied data set.  This will be used to explore the importance of underwater noise in influencing the quality of the marine environment for marine mammals.

European Commission (2008) ‘Directive 2008/56/EC of the European Parliament and of the Council of 17 June 2008 establishing a framework for community action in the field of marine environmental policy (Marine Strategy Framework Directive)’ Official Journal of the European Union L164, 25.6.2008, pages 19-40 (viewed 21 September 2018)