The target has been met in the Greater North Sea, where harbour porpoise bycatch is estimated to be below the precautionary threshold of 1% of the best population estimate. The assessment is inconclusive in the Celtic Seas because harbour porpoise bycatch is likely to be below the threshold of 1.7% of the best population estimate, but it is currently estimated to be above the precautionary threshold of 1%.

This indicator is used to assess progress against the following target, which is set in the UK Marine Strategy Part One (HM Government, 2012): “At the scale of the Marine Strategy Framework Directive Sub-Regions cetacean populations are in good condition: mortality of cetaceans due to fishing bycatch is sufficiently low so as not to inhibit population targets being met.”

The primary cause of mortality of cetaceans in the north-east Atlantic is being caught and entangled in fishing nets. Harbour porpoise and short-beaked common dolphin are the most commonly caught species in the North-East Atlantic. This indicator assessment focuses on bycatch of harbour porpoise only because the data available on short-beaked common dolphin were insufficient to construct robust estimates of bycatch.

Measures to protect cetaceans are set out in the UK Marine Strategy Part Three (HM Government, 2015). These include the monitoring of incidental capture and killing of cetaceans and to ensure, through conservation measures, that it does not have a significant negative impact on cetacean population size. European Commission regulations also require the use of acoustic deterrents (known as pingers) in identified fisheries on vessels larger than 12 meters.

This UK assessment focuses on two of the internationally agreed assessment units for harbour porpoise (Figure 1), which contain UK waters and sufficient data on bycatch. These are: across the North Sea, which covers most of the Greater North Sea Sub-Region, and the Celtic and Irish Seas, which includes the southern half of the Celtic Seas sub-region and inshore waters of the French part of the Bay of Biscay Sub-region. Bycatch has not been monitored or assessed recently in the West of Scotland assessment units because volumes are thought to be very low due in this region as a result of the regulations on fishing practices for example, the ban on the use of drift nets. 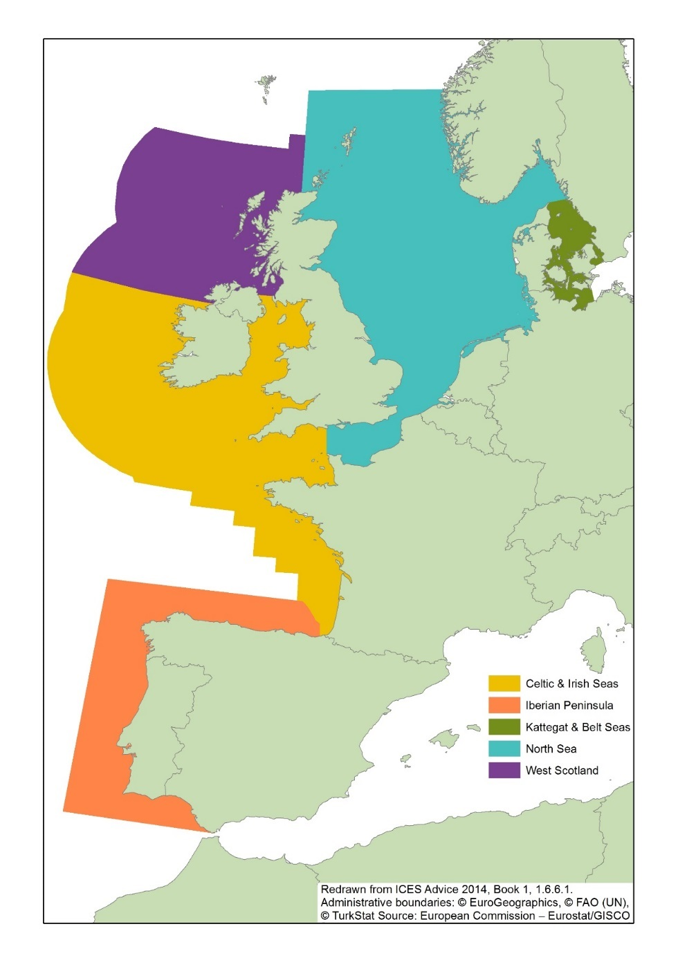 This assessment is based on that used by OSPAR for its Intermediate Assessment (OSPAR Commission, 2017), which uses the latest advice provided to the European Commission by the International Council for the Exploration of the Sea (ICES). Bycatch estimates are derived from estimates of annual fishing effort and counts of bycaught harbour porpoises. Bycatch is recorded by observers or by remote electronic monitoring on commercial fishing vessels as part of the UK Protected Species Bycatch Monitoring Scheme. ICES have advised caution because many caveats apply to the range of their bycatch estimates as a result of the reliability of fishing effort data and the potential for biases in the bycatch data from observers.

The target is assessed by comparing estimates of annual total bycatch against limits agreed by the Agreement on the Conservation of Small Cetaceans of the Baltic and North Seas (ASCOBANS): Total anthropogenic removal of harbour porpoises (mortality resulting from all pressures caused by human activities) should not exceed more than 1.7% of the best available estimate of abundance; and to achieve this, bycatch should ideally be less than 1% of the best available abundance estimate and ultimately, be reduced to zero (ASCOBANS, 2006)

The best population estimate for the Greater North Sea Sub-Region is that collected during the third Small Cetaceans in European Atlantic waters and the North Sea (SCANS-III) survey in 2016 of 345,400 (confidence value: 0.18) and for the Celtic and Irish Seas is that from the SCANS-II survey in 2005 of 107,300 (confidence value: 0.30) as SCANS-III data were incomplete for this region.

This indicator assessment has been led by the UK as part of the OSPAR Intermediate Assessment (OSPAR Commission, 2017).

Overall in UK waters, harbour porpoise bycatch was below 1.7% of the best abundance estimate. Bycatch had declined in the North Sea and the Irish Sea due to a decline in the static net fishing effort (HM Government, 2012).

In both sub-regions, bycatch was below the Agreement on the Conservation of Small Cetaceans off the Baltic and North Seas limit of 1.7% for ‘total anthropogenic removal’. However, in the Irish and Celtic Seas assessment unit, harbour porpoise bycatch had exceeded the precautionary objective to reduce bycatch to less than 1% of the best available abundance estimate. Table 1 shows the number of harbour porpoise that were estimated by ICES to have been killed by commercial fishing nets in the North Sea and the Irish and Celtic Seas assessment unit in 2013.

Table 1. Harbour porpoise bycatch mortality from fishing nets in each assessment unit, compared against the best estimate of abundance (ICES, 2016a). The best abundance estimate for the North Sea is taken from a preliminary analysis of the results from the Small Cetaceans in European Atlantic waters and the North Sea SCANS-III survey, while that for the Celtic and Irish Seas is taken from reanalysis of SCANS-II survey data.

No trends in estimated annual bycatch are available.

The current bycatch estimates are derived from observing only 0.28% of the fishing effort for the fishing gear types classified as ‘nets’. A higher observer coverage in dedicated surveys would also improve the reliability of future estimates of bycatch rate.

The bycatch estimates provided by ICES represent the best available. However, confidence in future assessments would be enhanced by more accurate estimates of bycatch rate and of fishing effort. For example, more accurate bycatch rates could be obtained by observing bycatch on a sample of vessels that represents the wider fishing fleet in terms of fishing gear types, vessels sizes, and distribution of fishing activity over space and time and differences in porpoise density.