Reported spill incidents greater than one tonne have decreased in number and as a proportion of the total number of spills over the assessment period. The evidence supports the conclusion that the UK target is currently being met.

This indicator is used to assess progress against the target set out in the Marine Strategy Part One (HM Government, 2012), which requires that the occurrence and extent of significant acute spills (such as spills of oil and oil products or spills of chemicals) and their impact on biota should be minimised through appropriate risk-based approaches.

The key pressures causing from the shipping industry spills include increased marine traffic, larger vessel sizes and increased navigational pressures in key areas such as approaches to ports and harbours. The UK oil and gas industry is under unprecedented pressure to improve productivity against a background of low oil price and maturing oil fields. In addition, the shift towards enhanced efficiency, late life operations and decommissioning requires a general adaption of working practices. While these pressures provide a changing operational environment, there is no evidence suggesting any subsequent impact on the occurrence of significant acute spills.

In the event of a major spill the potential impacts can be highly significant and potentially cause major impact to key ecological habitats, commercial fishing and aquaculture, and leisure/business use of the marine and coastal environment.

Measures taken to address spills of contaminants including oil and chemicals are set out in the UK Marine Strategy Part Three (HM Government, 2015). The shipping, port and harbours, and offshore oil and gas industries are effectively regulated in UK waters with implementation of key national and international regulations focusing on both safety and the minimisation of marine pollution.

In the event of spill occurrence, the UK has a well-developed and exercised process of response, including measures set out in the UK National Contingency Plan (HM Government, 2014). All spill reports from the oil and gas industry are followed up by the Department of Business, Energy and Industrial Strategy, to gather further information on the cause, the potential environmental impact, the response strategy and the measures being taken to prevent a recurrence. These measures, procedures and risk-based approaches help ensure that the occurrence and extent of significant acute spills and their impact on biota are minimised.

The assessment scales used were the Greater North Sea and the Celtic Seas.

The base dataset for the numbers of spills in UK waters is collated annually by the Advisory Committee on the Protection of the Seas on behalf of the UK Maritime and Coastguard Agency using data collected from the shipping, ports and harbours, and offshore oil and gas industries. This provides a consistent and long-term dataset that enables assessment of status and trends, though it cannot correct for changes in incident reporting practices. Further in-depth analysis of this dataset is conducted to investigate trends on a spatial and a significance basis (currently related to spill volume) for the purposes of this indicator.

No specific assessment thresholds are established for this indicator and the definition of ‘significant’ acute pollution in the context of spills is not yet available. For the purposes of this assessment, a spill volume of greater than one tonne is used for trend analysis.

The UK Government is fully engaged with European and international partners across a range of groups and initiatives relating to the prevention of spills including those presided over by OSPAR, International Maritime Organization and European Maritime Safety Agency.

No major marine oil spills have occurred in UK waters since 2005, and whilst there were a significant number of accidental discharges, only a very small percentage were greater than 2 tonnes, which was used as the threshold for large spills in the earlier assessment report (HM Government, 2012).

During the period 2000 to 2014, the annual number of reported spills from vessels has steadily reduced from approximately 300 to 200 incidents, but the number of reported spills from offshore oil and gas installations has increased from about 300 to 600 annually. However, the vast majority of the offshore oil and gas spills are less than 100 kg. While this has resulted in a very slight overall upward trend in spill numbers the data are too variable to make strong statements in relation to overall trends. The overall spill trends are provided in the Advisory Committee on Protection of the Sea annual report on discharges and releases of oil in the UK Exclusive Economic Zone for 2014, which included chemical and oil spills between 2000 and 2014 (Figure 1; Dixon, 2015). 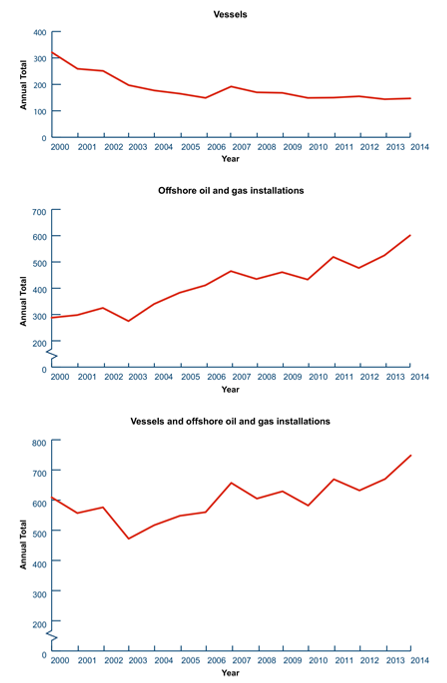 Figure 1. Annual totals for reported discharges and releases attributed to vessels and offshore oil and gas installations 2000 to 2014. Figure from Dixon (2015).

There was a general upward trend in the number of reported spills over the period 2012 to 2014. This is thought to be driven by more stringent reporting practices. However, the numbers of oil spills greater than one tonne has showed a downward trend both in terms of numbers and as a proportion of the total reports (Tables 1 and 2).

Table 1. Numbers of reported oil spill incidents (not including chemical spills) from 2012 to 2014 sorted by source sector and size. Oil and Gas data from Department for Business, Energy and Industrial Strategy. Shipping and Ports data from UK Maritime and Coastguard Agency.

Table 2. Analysis of reported oil spill incident data (2012 to 14) to show the percentage of spills over one tonne as a proxy for ‘significant’ spills.

The vast majority (over 99%) of chemical spills are reported from the offshore oil and gas industry but the overall numbers of spills covering the reported period are generally steady with no discernible trend (Tables 3 and 4). Note that the total incident numbers are slightly lower than in Table 4 due to 3 reports unattributed to a sea region.

Table 3. Numbers of reported chemical spill incidents from 2012 to 2014 sorted by source sector and size. Oil and Gas data from Department for Business, Energy and Industrial Strategy. Shipping and Ports data from UK Maritime and Coastguard Agency.

Since 2012, the volume of oil and chemicals accidentally spilled has varied from year to year but is generally small and of relatively minor significance.

In 2010, 6% of spills were greater than 2 tonnes so the weight of evidence supports a slight downward trend in both the total and overall percentage of larger (greater than one tonne) spills since that time. The UK Marine Strategy Framework Directive target (HM Government, 2012) indicates that the occurrence and extent of acute spill events should be minimised through risk-based approaches. The evidence presented in this assessment supports the conclusion that the target is currently being met.

This analysis uses third party reporting of incidents as the key data source and the Marine Strategy Framework Directive (European Commission, 2008) assessment is not the primary driver for that process. As a result, there is little control over reporting practices which can have a significant effect on temporal inter-comparability for trend analysis. Understanding reporting practices and how they are influenced, and the promotion of standardisation would be beneficial for future assessments.

The use of spill volume as a proxy for environmental ‘significance’ is a blunt tool. Numerous other factors, such as proximity to sensitive/valuable resource, the type of oil spilled and seasonality, are potentially of greater importance. Consideration should therefore be given to the development of a more robust assessment of ‘significant’ spills, although this is accepted as problematic.