The assessment shows that since 2012, flatfish are exposed to some polycyclic aromatic hydrocarbons, polychlorinated biphenyls, furans and dioxins in the Celtic Seas and Greater North Sea sub-regions, but these do not induce significant 7-ethoxyresorufin O-deethlyation (EROD) enzyme activity. There is no evidence of systematic exposure at the regional level. Recent trends have been mainly downward or stable. Currently, there is no upper-threshold for EROD activity that indicates whether significant harm to sea life has occurred, so assessing progress towards the target has not been possible.

In the UK Initial Assessment (HM Government, 2012), the key pressures associated with this indicator were riverine and direct inputs of legacy contaminants arising from point and diffuse sources, atmospheric and acute events that have entered marine sediments, which can then accumulate in fish and increase the activity of detoxification enzymes. These are still relevant.

There is a robust UK legislative framework in place for controlling and reducing pollution from contaminants, including appropriate consenting and monitoring programmes, which is described in the UK Marine Strategy Part Three (HM Government, 2015). However, many of the determinands fish are exposed to entered the sea before the controls were put in place and, due to their persistence, are still present. Removing these from the sea is not considered to be a practicable option.

Status and trend assessments were conducted for the UK portion of the Greater North Sea and Celtic Seas Marine Strategy Framework Directive (European Commission, 2008) sub-regions, and at the smaller scale of the 8 UK biogeographic marine regions set out in Charting Progress 2 (UKMMAS, 2010).

The activity of the detoxification enzyme 7-ethoxy-resorufin-O-deethylase (EROD) is used in biomonitoring studies as a measure of exposure to hazardous substances. Risk-based monitoring and assessment of the status and trends of activity of EROD in fish was conducted within the annual UK Clean Seas Environmental Monitoring Programme using methods and principles set out in the OSPAR Coordinated Environmental Monitoring Programme. The assessment analysed both status and trend results of individual monitoring stations and synthesised the result to assess trends on the biogeographic regional level.

Most biological effects are OSPAR candidate indicators because not all countries use them in environmental monitoring. OSPAR has developed species-specific Background Assessment Criteria but no Environmental Assessment Criteria (OSPAR Commission, 2009) to assess the activity of EROD in fish liver. OSPAR has an aspirational ultimate objective to achieve the background concentrations which naturally occur in the marine environment and whilst the target was not described in the UK Marine Strategy Part One (HM Government, 2012), the status and trend results were used to examine progress towards this objective.

Although this is not an OSPAR indicator, the UK and OSPAR are working together in the development, monitoring and assessment of this indicator.

No initial assessment of 7-ethoxy-resorufin-O-deethylase (EROD) activity in flatfish liver was carried out in 2012 (HM Government, 2012).

There is currently no upper threshold for EROD activity. For the Greater North Sea and Celtic Seas, 67% and 68%, respectively, of the assessments were significantly below the Background Assessment Criteria, implying limited exposure to contaminants and therefore meeting the target described in the UK Marine Strategy Part One (HM Government, 2012) for this biological effects indicator (Figures 2 and 3). Overall, there is high confidence in this assessment but no confidence in whether the exposure is harmful at stations where the Background Assessment Criteria was breached due to the lack of an upper threshold. 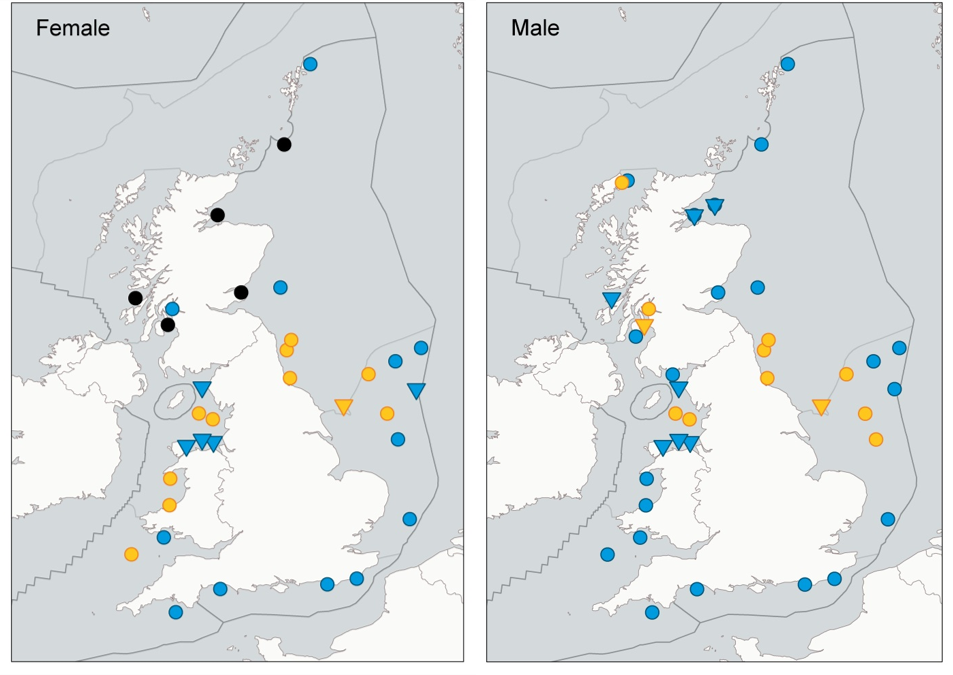 Of the 61 time series trend assessments in the Celtic Seas and Greater North Sea, 15 stations (5 in the Greater North Sea and 10 in the Celtic Seas) showed significant downward trends. The rest were stable. Overall, 3 of the 5 assessed biogeographic regions showed a significant downward trend (Northern North Sea, Southern North Sea and the Irish Sea), while the other 2 biogeographic regions were stable (Eastern Channel, and Minches and West Scotland).

Overall, the Celtic Seas and Greater North Sea sub-region assessments indicate that contaminants in the marine environment do not significantly induce EROD enzyme activity in flatfish. The Northern North Sea followed by the Irish Sea and Southern North Sea biogeographic regions are most at risk from such contaminants with 42%, 38%, and 36%, respectively, of assessments failing the Background Assessment Criteria threshold. This indicates that fish are exposed to contaminants, and increased enzyme activity results from their metabolization. The relatively low concentrations of EROD activity in flatfish, below Environmental Assessment Criteria (OSPAR Commission, 2009) concentrations of polycyclic aromatic hydrocarbon metabolites in fish bile, and of polycyclic aromatic hydrocarbon concentrations in sediments and shellfish, support the argument that flatfish are not exposed to harmful contaminant concentrations in coastal and offshore areas.

During severe exposure to contaminants EROD activity is inhibited. However, levels of exposure are not expected to be high enough to trigger this response, and it would, therefore, be useful to develop Environmental Assessment Criteria to indicate an unacceptable level of response.