Total inputs of cadmium, mercury and lead to the Greater North Sea have decreased considerably since 1990, although further improvements, since 2012, are not evident. Atmospheric sources make up a considerable proportion of the total inputs. The major sources are now re-suspended material from exposed terrestrial soils and from long-range transport.

UK target on inputs of metals

The UK has no formal Marine Strategy Framework Directive (European Commission, 2008) target relating to the inputs of metals from water and the atmosphere to the marine environment, but it supports the OSPAR strategic objective to prevent pollution of the North East Atlantic by continuously reducing discharges, emissions and losses of hazardous substances.

In the UK Initial Assessment (HM Government, 2012) the key pressures associated with this indicator were the atmospheric deposition and riverine and direct inputs of cadmium, mercury and lead, from various industrial and diffuse sources. These are still relevant.

The UK Marine Strategy Part Three (HM Government, 2015) describes the robust UK legislative framework for controlling and reducing pollution from cadmium, mercury and lead including appropriate consenting and source control regimes and river basin management plans. However, much of the cadmium, mercury and lead entered the environment before many of the controls were put in place and due to their persistence, are still present.

Risk-based monitoring and assessment of the inputs of metals from rivers and direct discharges was conducted according to methods and procedures set out in the OSPAR Riverine Inputs and Direct Discharges programme (OSPAR Commission, 2014) and the related annual national reports. Atmospheric load data were produced by OSPAR using information from the European Monitoring and Evaluation Programme – Meteorological Synthesising Centre East based on national reporting of emissions to the air under the UN Economic Commission for Europe Convention on Long-range Transboundary Air Pollution (UNECE, 1983). For operational reasons, the OSPAR assessment focussed on the Greater North Sea.

Assessment thresholds are not available for this indicator. Trends of inputs were used to assess progress towards the OSPAR reduction objective, which is supported by the UK.

The UK has regularly reported information on inputs of metals to OSPAR, held in the associated OSPAR database, and the UK has participated in the monitoring and assessment of the OSPAR “metals inputs” common indicator. The UK results have been used in the OSPAR Intermediate Assessment (OSPAR Commission, 2017).

The Initial Assessment, done in 2012, indicated there were downward trends in the waterborne and atmospheric inputs of cadmium, mercury and lead between 1990 and 2007 (HM Government, 2012).

A status assessment was not possible for this indicator.

Although there are insufficient data for a robust trend analysis, the data since 2007 indicates that the UK waterborne inputs have stabilised, with annual increases and decreases largely reflecting rainfall patterns. The downward trend observed in the UK Initial Assessment does not appear to have been maintained.

The method for calculating atmospheric inputs used by OSPAR for atmospheric loads has changed, so direct comparison with the UK Initial Assessment findings (HM Government, 2012) is not possible. However, the results for atmospheric inputs originating from OSPAR countries show a similar picture, indicating that the reductions observed in the 1990s and early 2000s are have now stabilized.

There are a number of uncertainties associated with both the riverine and atmospheric load estimates, which gives them a medium confidence rating. There is moderate confidence in the methods and low confidence in the data used for this assessment. 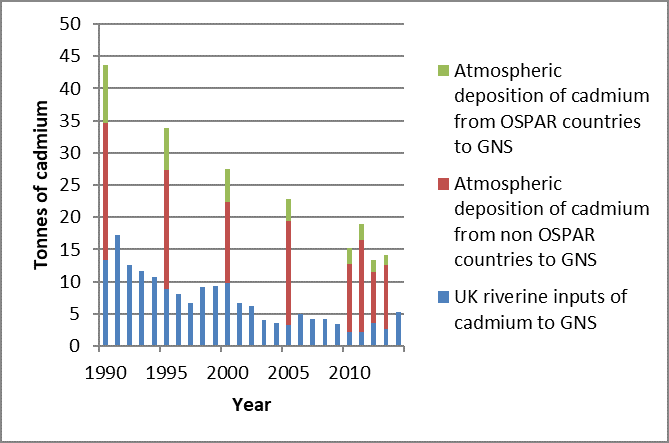 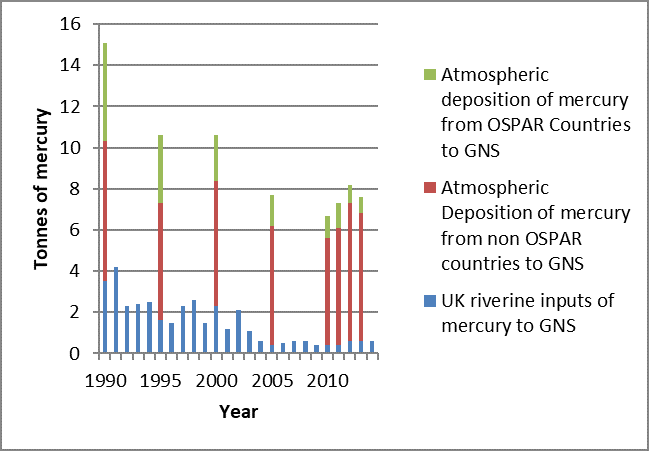 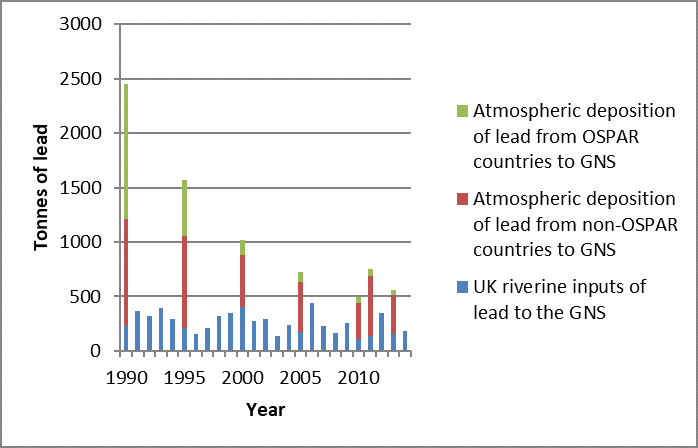