Stressed organisms are more susceptible to disease and evaluating the health status of fish provides an integrated assessment of the effects of multiple stressors, including contaminant exposure. The Fish Disease Index is determined from observations of the incidence and severity of externally visible diseases and parasites in UK flatfish, and indicates that dab have an acceptable health status.

This indicator is used to supplement the target covering the biological effects of contaminants set out in the Marine Strategy Part One (HM Government, 2012), which requires that “the intensity of those biological or ecological effects due to contaminants agreed by OSPAR as appropriate for Marine Strategy Framework Directive purposes are below the toxicologically-based standards”. Whilst this indicator has not yet been agreed by OSPAR for Marine Strategy Framework Directive (European Commission, 2008) purposes, its assessment provides an integrated measure of the health of fish, which can be impacted by exposure to contaminants and other environmental stressors and has therefore been included in the assessment of Good Environmental Status for Contaminants.

The key pressures associated with this indicator are the presence in the environment of contaminants that can damage the immune system of organisms (such as polychlorinated biphenyls, dioxins, certain pesticides and some metals including mercury), and other environmental stressors including inadequate nutrition and sub-optimal physico-chemical conditions. In the UK Initial Assessment (HM Government, 2012), the main anthropogenic pressures responsible for the presence of contaminants in the sea were identified as being point sources (for example, industrial and sewage discharges and emissions) and diffuse sources (for example, agriculture, roads run-off, households and atmospheric deposition). No significant new pressures have since been identified.

There is a robust UK legislative framework in place for controlling pollution from the main sources of contaminants (energy production, transport, urban and industrial uses), including appropriate consenting and River Basin Management Plans described in the Marine Strategy Part Three (HM Government, 2015).

The monitoring and assessment of external fish disease is an OSPAR Candidate Indicator, as not all Contracting Parties currently include it in their monitoring programmes.

The Fish Disease Index is not included as part of the UK Marine Strategy Framework Directive target for Good Environmental Status (often referred to as GES), although it can be used to provide additional confidence in the assessments of contaminants. Fish Disease Index responses below the Environmental Assessment Criteria indicate an acceptable health status for the monitored flatfish populations. Figure 3 shows the locations of the sampling stations and the results of the assessment of standardised Fish Disease Index for dab in the UK biogeographic marine regions for the most recent year available at each site.

Overall, dab from the UK North Sea were assessed as having a disease status that is above background but below levels of significant concern. In the period 2010 to 2015, this status was stable for two of the three UK regions in the Greater North Sea, but disease incidence/severity increased in the Northern North Sea.

Overall, dab from the UK portion of the Celtic Seas were assessed as having a disease status above background but below levels of significant concern. Disease status was stable for the period 2010 to 2015.

The number of stations assessed for status and for trends in each Marine Strategy Framework Directive sub-region and each UK biogeographic region are shown in Table 1.

Table 1. Number of time series within each UK biogeographic marine region used in the assessment of fish disease status and tends. Atlantic North West Approaches were not assessed. 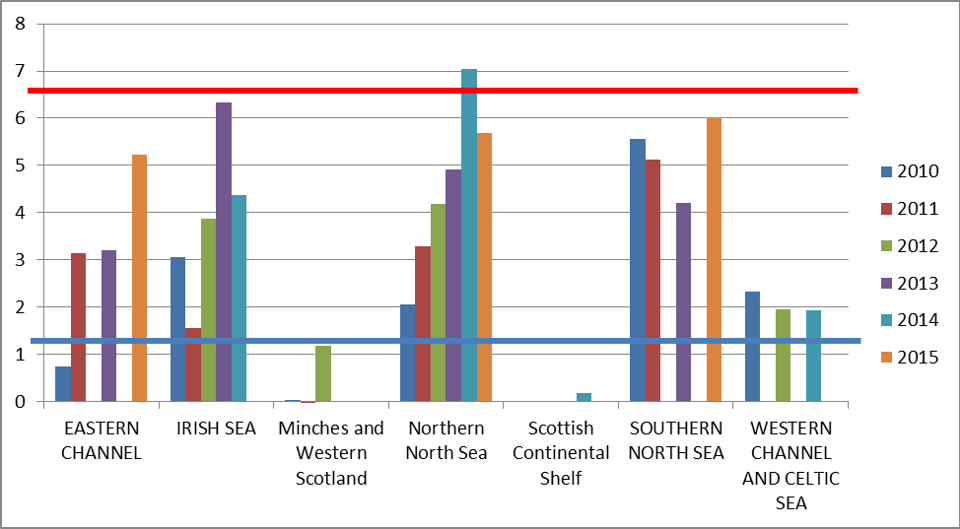 It is not clear what is driving the increasing trend for Fish Disease Index in the Northern North Sea. Whilst hyperpigmentation has been reported as increasing in long-term datasets (Grütjen and others, 2013; Lang and others, 2017a), in this assessment of data from 2010 to 2015, there are no clear upward trends in the incidence/severity of any individual disease, and the increase is therefore a cumulative response. The Shetland site, with data available only between 2010 and 2012, had relatively low Fish Disease Index scores for the North Sea. However the subsequent absence of this site from the dataset does not explain why the Fish Disease Index shows a year-on-year increase from 2010 to 2014. Further analysis of data from a longer time series (including pre-2010 data) is required to investigate the reasons for this increase.

Fish disease did not exceed the Environmental Assessment Criteria for any marine region and thus dab disease status is acceptable for the UK portions of both the Marine Strategy Framework Directive Greater North Sea and Celtic Seas sub-regions. There were finer scale temporal and spatial variations within the assessment. It can be concluded that the disease status of dab is similar to the contaminant status of the UK seas: healthy in the North and West, but less healthy in the Irish Sea, North Sea and eastern Channel. This status also reflects the relative degrees of other anthropogenic pressure. Elevated disease prevalence is an ecologically relevant response to the impact of environmental stressors on fish immunocompetence. Health status monitoring of fish is an important component in assessing ecosystem health.