UK Target on contaminants in the water column

This is one of the indicators used to assess progress against the target relevant for contaminants set out in the Marine Strategy Part One (HM Government, 2012). The target requires that concentrations of substances identified within relevant legislation and international obligations are below levels at which adverse effects are likely to occur. In this case, the levels used are the Environmental Quality Standards set out in the Priority Substances Directive 2013/39/EU (European Commission, 2013). The contaminants under consideration were those on the Water Framework Directive Priority Substances List, but do not include those with biota Environmental Quality Standards.

In the UK Initial Assessment (HM Government, 2012) the key pressure associated with this indicator was the contaminants that reach coastal waters from various sources through atmospheric deposition, riverine inputs, contaminated estuarine and coastal sediments and direct discharges to the sea. These pressures continue to be relevant.

There is a robust UK legislative framework in place for controlling and reducing pollution from contaminants posing a risk to coastal waters and these are described in the UK Marine Strategy Part Three (HM Government, 2015a). In particular, many of the measures put in place through the Water Framework Directive (European Commission, 2000). River Basin Management Plans (HM Government, 2015b) aim to prevent point and diffuse sources of priority hazardous substances from entering the water column in surface coastal waters where problems have been identified. These also include marketing and controls of products containing contaminants.

Monitoring and assessment of the status of contaminants were conducted within the 2015 Water Framework Directive River Basin Management Plans (HM Government, 2015b) classifications, using methods and principles set out in monitoring guidance developed by the UK Water Framework Directive Technical Advisory Group. There was insufficient comparable information to analyse trends over the time periods used. Chemicals were monitored at sites where, based on catchment knowledge, they were likely to be present.

There has been cooperation between officials and scientists at a national level to compare results of Water Framework Directive (European Commission, 2000) and OSPAR assessments (for example: OSPAR Commission, 2017) of contaminants to provide a more joined up understanding of the sources of contaminants, how they move between environmental compartments, and the most appropriate assessment thresholds. 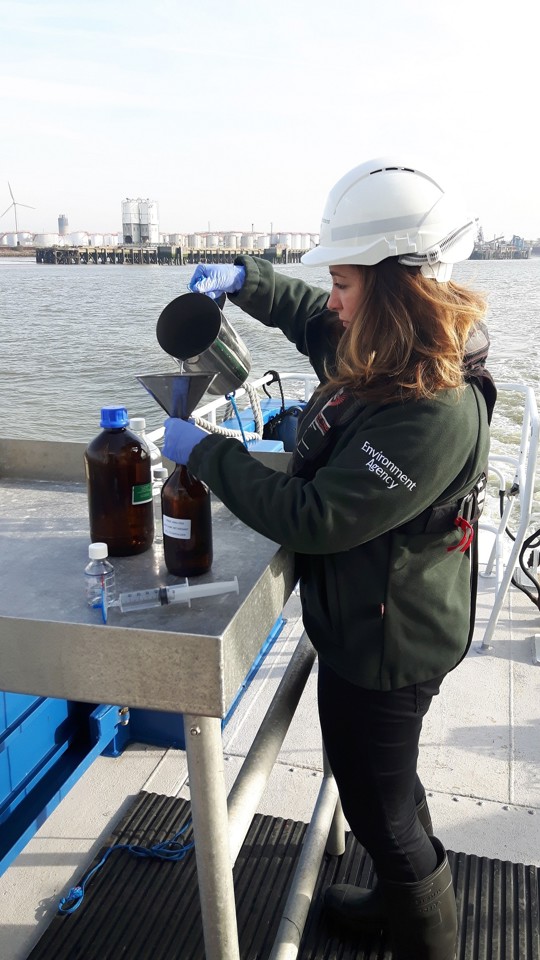 Findings in the UK Initial Assessment

In the UK initial assessment (HM Government, 2012) all coastal water bodies in Scotland and Northern Ireland achieved good chemical status for contaminants, while in England and Wales, 91% of coastal waters assessed were at good chemical status. The assessments were made on the basis of information collected for the EU Dangerous Substances (European Commission, 2008) and Shellfish Waters Directives (European Commission, 2006).

The methodologies and substances considered in the latest 2015 River Basin Management Plans (HM Government, 2015) classifications have changed and are more robust, so the results are not directly comparable with those used for the 2012 assessment.

Across the UK, 540 Coastal Water Bodies out of 561 (96%) met the Environmental Quality Standards values and achieved good chemical status. The main chemicals causing failures were ubiquitous persistent, bioaccumulative and toxic substances (Polyaromatic hydrocarbons, lindane, tributyltin (commonly known as TBT) and mercury) and cypermethrin (Table 1). There is high confidence in these assessments.

96% of the UK Water Framework Directive coastal water bodies have good chemical status in the 2015 River Basin Management Plans (HM Government, 2015). Most of the failures are caused by ubiquitous, persistent, bioaccumulative and toxic chemicals. These often entered the marine environment before their usage in products was banned or restricted and which will remain in the marine environment for many decades.

The main knowledge gap is if chemicals not included on the Water Framework Directive priority lists (HM Government, 2016) and “watch list” related to this indicator might also be affecting sea life. This is being addressed through the introduction of an analytical scanning technique. This involves gas chromatography mass spectrometry of water and sediments to qualitatively check the presence of a wide range of additional chemicals. Work is continuing to improve understanding of the risks of these substances and potential costs. A proportion of investigations and cost and benefits assessments should be completed to inform the decisions in the next water company business planning cycle.