The assessment of community response to changes in temperature shows geographical variations across the UK, with some areas less resilient to climate change. Community Temperature Index values for plants are much lower than those for animals and therefore are more vulnerable to increases in surface temperature in general. This will exacerbate the effect of additional anthropogenic pressures on intertidal rocky habitats.

This indicator has been developed to assess the ‘maintain native intertidal biodiversity’ target which is set in the UK Marine Strategy Part One (HM Government, 2012). However, a full assessment against this target is not possible at this stage.

Climate change is one of the key pressures driving biodiversity loss and ecosystem service changes. The impacts on marine organisms can be either direct by impacting their physiology, or indirect through changes in the distribution of prey/predators. Intertidal and shallow habitats, in particular, are likely to be significantly impacted through sea level rise and temperature change.

This indicator is only applicable to intertidal rocky areas. A full assessment of the Marine Strategy Framework Directive sub-regions was not possible at this stage due to early stages of the indicator development.

The Community Temperature Index is a measure of the status of a community regarding its species composition of cold- and warm-water species. It is quantitative, easily applied, and gives a direct measurement of the response to climate and climate change across all the species in a community. The index builds on a solid foundation of understanding of changes in species abundance and presence in relation to patterns of temperature across geographical scales and over time. This information is essential to understand how anthropogenic pressure exacerbates effects from climate change. Community Temperature Index values have been calculated for 1,805 rocky shore surveys around the UK since 2002.

The indicator has not been used for the OSPAR Intermediate Assessments (OSPAR Commission, 2017) but may be used for future regional analysis.

This indicator was not considered as part of the Initial Assessment (HM Government, 2012).

The approach for the development of the Community Temperature Index accounts for prevailing physiographic, geographic, and climatic conditions as required under the Marine Strategy Framework Directive Descriptor on Biodiversity (European Commission, 2008), and aims to assess the condition of the typical species and communities for intertidal rocky habitats in UK waters within the context of climate change. Thus, the indicator target should reflect that species are present as expected for the habitat type and the prevailing physical conditions.

The Community Temperature Index has been developed with sampling data across UK rocky shore communities (Figure 3) as a practical measure of community response to changes in temperature along geographical gradients and over time. Communities of animals on rocky shores are comprised of species with distributions centred in warmer areas. Plant communities are generally comprised of cold-water species, therefore making a negative response to climate change more likely for plants. The Community Temperature Index for animals is lower on wave-sheltered shores than on wave-exposed shores, likely due to the reduction of temperatures underneath macroalgal canopies. The patterns of Community Temperature Index values generally follow isotherms around the UK but with local variations and potential for biogeographic discontinuities (Figure 4). For example, in Scotland, enclosed areas such as the Clyde Sea and the Firth of Forth have lower Community Temperature Index’s for animals than nearby open coasts. Community Temperature Index for plants (Figure 4b), in contrast, follows more of a North-South gradient with a greater dominance of warm-water species in the English Channel than in southern Ireland. The negative thermal bias of macroalgae across most of the UK (except for eastern Scotland and north-east England) may indicate communities are more vulnerable to the effects of warming as most species are in the cold half of their range and therefore likely to decline with further warming. This suggests that climate warming may have increasingly negative impacts on intertidal macroalgae in the south-west. Communities of intertidal animals have positive thermal bias across the region, with only local patches of modestly negative thermal bias. This suggests that, while individual cold-water species may suffer, overall, intertidal animals may benefit from the effects of warming since they have distributions centred in warmer areas. Areas of locally negative thermal bias suggest areas where species of animals from warmer climates may be likely to invade. 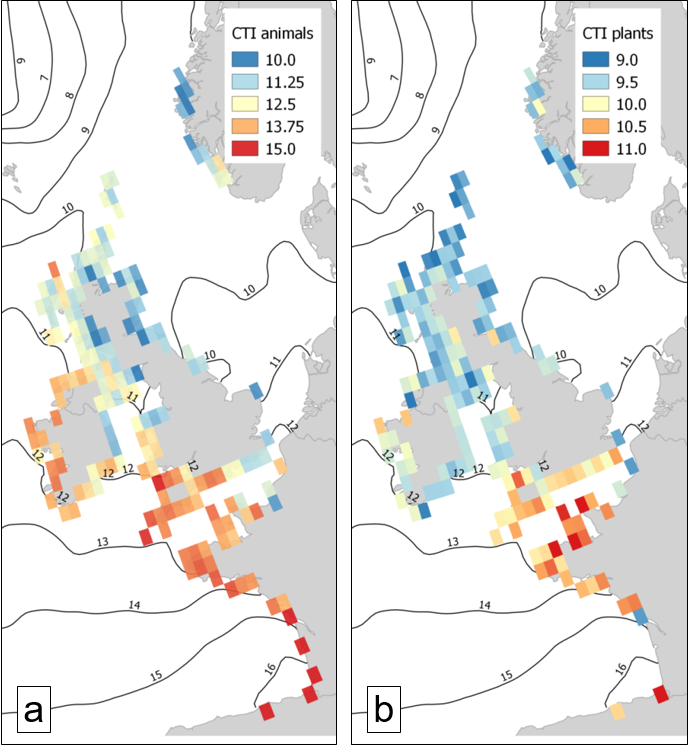 The trend is unknown: The indicator was not considered as part of the Initial Assessment (HM Government, 2012).

The Community Temperature Index can be compared with prevailing temperature conditions to produce useful further measures, such as thermal bias, with implications for the sensitivity of such communities to further climatic warming, providing a unique way to assess indirect ecological effects which improve resilience to warming-related biodiversity change.

The key knowledge gaps are: