This indicator is used to assess progress against the target set for biogenic seafloor habitats in the Marine Strategy Part One (HM Government, 2012), which requires the area of selected habitat to be stable or increasing and not smaller than the baseline value.

Aquaculture, navigational dredging, dredge and spoil disposal, coastal development, and recreational activity are the main causes of physical loss to horse mussel reefs (Modiolus modiolus) and seagrass beds (Zostera marina). Pressure from these activities results in direct substratum loss, smothering by suspended sediment, and cause changes to the characteristics of the habitat. This assessment focuses on horse mussel reefs and seagrass beds. Both habitats are very fragile and vulnerable to pressures from human activities. These habitats are an important food source, refuge, and nursery ground for many species.

Horse mussel beds and seagrass beds are protected under national and international legislation and conventions and the target is consistent with this protection. Activities can be managed to reduce potential physical loss through the following measures:

Due to data limitations with regards to the actual location and extent of these biogenic habitats, the assessment has been carried out on modelled data at the Marine Strategy Framework Directive UK level.

This indicator measures the potential physical loss caused by human activities from locations where horse mussel reefs and seagrass beds are predicted to be. Data from current known horse mussel and seagrass distributions (presence and absence) were used to model and select areas of potentially suitable habitat elsewhere in the UK (Figures 1 and 2). 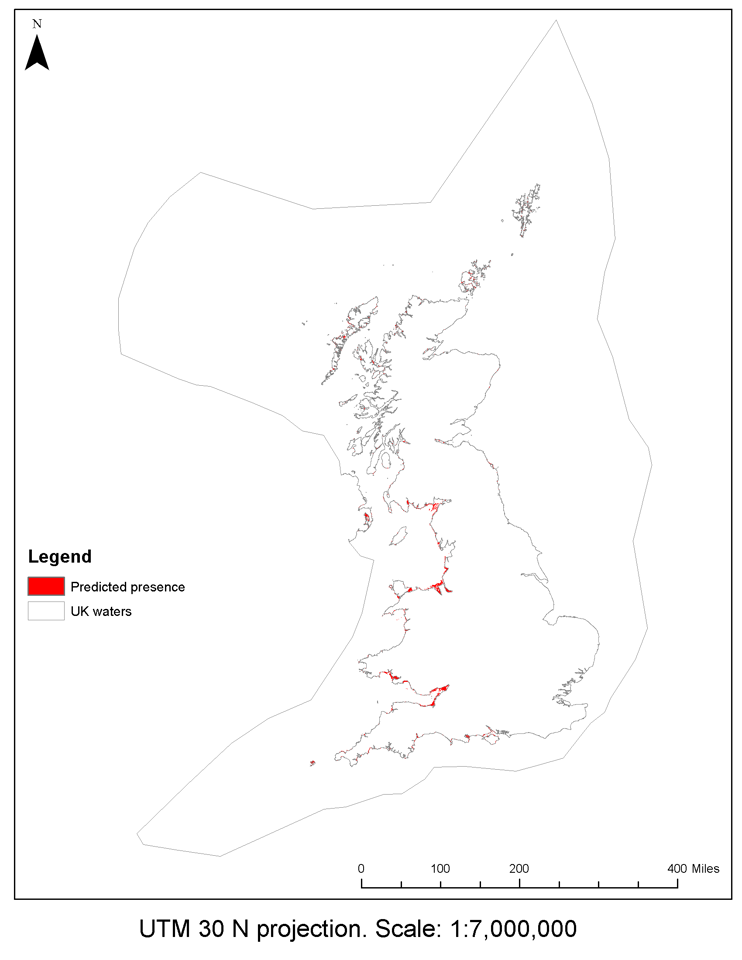 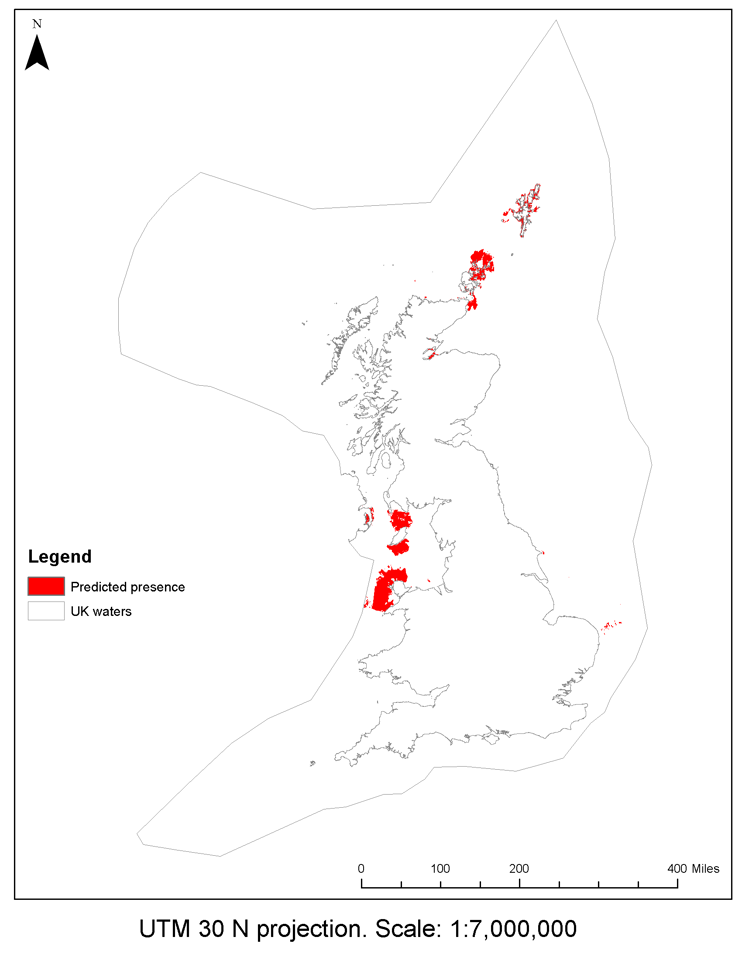 The extent of overlap between the predicted distribution of each habitat and the relevant physical footprint is used to estimate the amount of habitat that has potentially been lost due to human activity prior to 2016.

The thresholds are based on the assessment target above.

It has been proposed that this indicator could be used at the OSPAR scale in future assessments.

This indicator was not available as part of the Initial Assessment (HM Government, 2012).

According to the model, 2% of the potential habitat for seagrass beds (Zostera marina) in the UK has been lost because of activities taking place up to 2016, equating to 32 km2 of lost habitat. A larger area of horse mussel reefs (Modiolus modiolus) has been lost because of human activities, totalling 39km2, but this represents only 0.5% of potential habitat for horse mussel in UK waters. The assessment results show that the indicator target has not been achieved during this reporting period.

The main causes of potential physical loss on seagrass beds are aquaculture, navigational dredging, dredge and spoil disposal, and coastal development. Navigational dredging, dredge and spoil disposal, aquaculture, and recreational activity contributed the most to potential physical loss of horse mussel reefs (an example of the overlap between some activities and horse mussel habitats is shown in Figure 4). 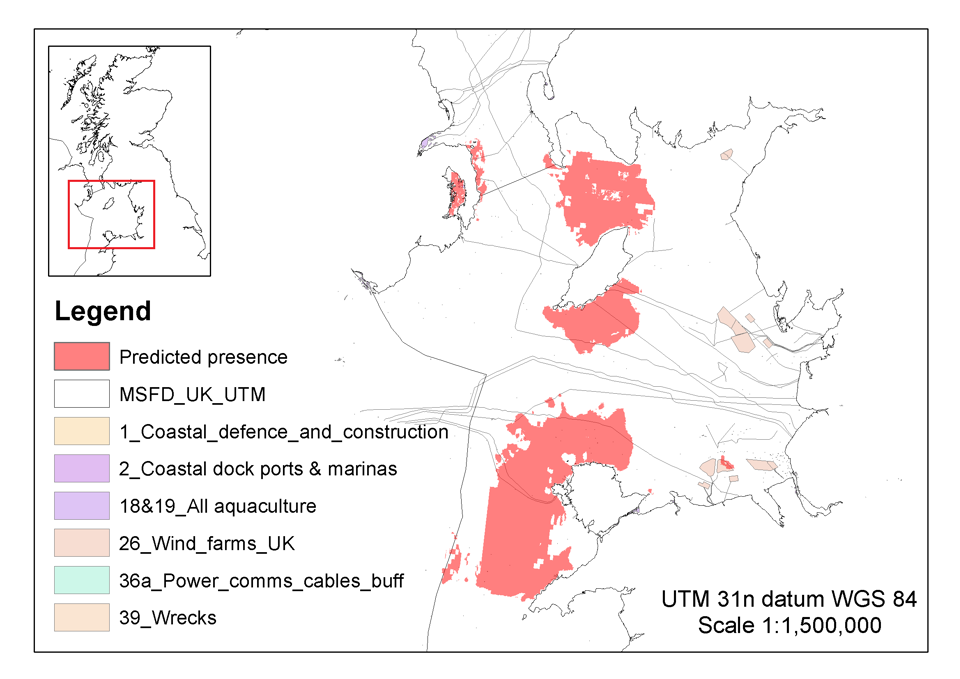 Figure 4. Example areas of overlap between the predicted distribution of horse mussel reefs (Modiolus modiolus) and human activities that cause potential physical loss.

Due to the lack of available data, it was not possible to include all relevant activities in the calculations of potential physical loss. Of particular importance is the absence of spatial data on use of bottom contact gears by small fishing vessels with bottom contact gears. This absence of data may mean that the extent of habitat loss reported above has been underestimated. Confidence levels in the status assessment values, therefore, are low.

Although other pressures are known to impact on these habitats, and are currently of greater concern, many are reversible (within 12 years) or damaging and as such were not in the scope of the analysis of potential physical loss (no recovery within 12 years).

The trend is unknown, the indicator was not considered as part of the 2012 Initial Assessment HM Government, 2012).

The target has not been met for either seagrass beds or horse mussel reefs in UK waters. The extent and distribution of each habitat is neither stable nor increasing. This assessment is based on estimates of the extent of potential physical loss to each habitat caused by human activities up to and including the period 2010 to 2016. Potential physical loss is likely to be underestimated because, due to the lack of data, not all relevant activities were included in the assessment.

Mathematical modelling was used to estimate the potential distribution and extent of suitable habitat for horse mussel reefs and seagrass beds. However, it is also important to note that the predicted suitable habitat areas represent ‘potential’ habitat, which will differ from the ‘realised’ (occupied). The model could be improved if further data from realised habitat is included in future assessments.

1University of Hull – Institute of Estuarine and Coastal Studies