Trawling of the seafloor by commercial fisheries is widely distributed. Five out of the eight subdivisions assessed were below target, with high disturbance in 31% to 75% of the cells assessed across the UK sub-regional seas.

This indicator is used to assess progress against the following qualitative target set for seafloor habitats in the Marine Strategy Part One (HM Government, 2012): the level of exposure to pressure at the level of the Marine Strategy Framework Directive sub-regions should not result in more than Moderate Impact/vulnerability of the habitat (dependent on the sensitivity of the habitat to this pressure).

There is a huge diversity of life inhabiting the seafloor in UK waters. These benthic habitats are subjected to physical disturbance by human activities such as fishing, sand extraction, and offshore construction. Some habitats, such as Maerl beds (calcareous algae) from South West England are highly sensitive to disturbance and can be easily damaged, whereas other habitats, like mobile sediments, are more resilient and are less affected by human disturbance.

Existing measures set out in the Marine Strategy Part Three (HM Government, 2015) include the management of Marine Protected Areas, Common Fisheries Policy regulations, Scallop Fishing Orders, fisheries measures such as trawl bans, and OSPAR recommendations for the protection of threatened and declining habitats.

Progress against the UK target was assessed in sub-divisions of each UK Marine Strategy Framework Directive sub-region (the Celtic Seas and Greater North Sea) and in UK waters within adjacent OSPAR regions (see Table 1).

Table 1. Percentage of seafloor predicted to be subjected to higher levels of disturbance (category 5-9) by fishing.

The current indicator is focussed on fisheries. Other human activities will be included in later rounds of assessments. The indicator uses best available information from existing programmes:

These two sources of information (pressure and sensitivity) are combined to calculate the potential damage to seafloor habitats.

In 2012, a method using expert judgement found that the spatial extent of damage from bottom fisheries was considered to far outweigh contributions from other sources of this pressure (HM Government, 2012).

Figure 5 shows the distribution of surface abrasion, including areas where no fishing occurs, from low to high surface pressure. The level of pressure across the 6 years was not always constant: 71% of the cells experienced a consistent level of fishing pressure between years, and 29% showed high levels of variability in the fishing pressure (a change of 3 categories or more on the fishing pressure in the same cell across years is considered to be highly variable). The data for surface abrasion (Figure 5), was aggregated with subsurface abrasion data and then combined with habitat sensitivity data, to produce disturbance values for 2010 to 2015 (Figure 8).

The target is achieved in the UK portion of OSPAR Region V (Wider Atlantic), although the disturbance in some areas around Rockall Bank and the shelf break was at the highest level (category 9) due to a combination of sensitive habitats and regular fishing activity. Incomplete data made it difficult to assess fishing impacts in the UK portions of OSPAR Region IV (Bay of Biscay and Iberian Coast) and OSPAR Region I (Arctic Waters).

A confidence analysis of the sources of habitat and sensitivity data available to support the results shows a high degree of spatial variability (Figure 10). The highest level of confidence is around the highly-surveyed areas (such as Marine Protected Areas), for example, off the Northumberland coast, where point data available was used to produce a sensitivity layer. The lowest confidence is observed where modelled habitat data have been used to calculate sensitivity, including large areas of deep-sea, West of Scotland. The most widespread habitat types in the UK, are sublittoral soft sediments such as sublittoral coarse sediment, sand, mud, and mixed sediment. The habitat types were used to examine spatial variability (Figure 11). 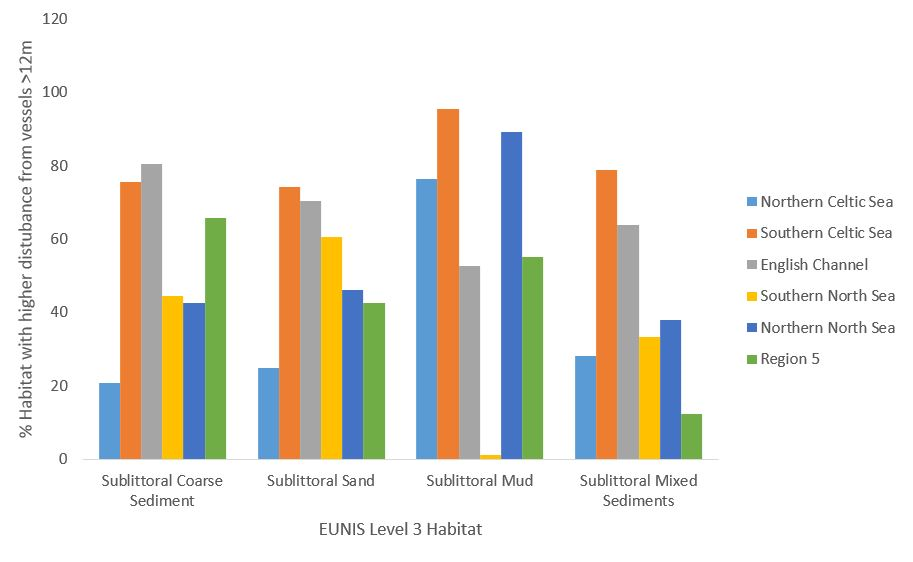 Figure 11. Percentage of total area of each habitat that is predicted to be subjected to higher levels of disturbance (category 5-9) in each of the UK Sub-Regional Seas.

Some areas assessed (Southern Celtic Seas and English Channel) showed higher levels of disturbance across all habitat types (>50% of habitat area subject to higher disturbance), while other areas showed a wider range in disturbance levels.

Unknown: The indicator was not considered as part of the 2012 Initial Assessment. The analysis of variation in disturbance during 2010 to 2015, did not show any clear trends, mainly due to the limited temporal data available for this assessment.

There is an underestimation of disturbance in some areas due to the lack of data prior to this assessment and from small inshore fishing vessels. However, some areas might have an overestimation as pressure data is evenly distributed within a cell.

Research is required to develop a fully quantitative and cost eﬃcient method in collaboration with agencies both across and outside of the UK (including OSPAR and the International Council for the Exploration of the Sea) to address: