In the UK Initial Assessment 2012 (HM Government, 2012), long-term positive salinity trends were observed at the bottom waters of the northern North Sea. From 2011 a sharp decrease in salinity of the adjacent Atlantic waters was measured, which may reduce (or reverse) the long-term increases salinity reported in the previous assessment.

Salinity affects marine ecosystems in many ways. Together salinity and temperature control water density affecting circulation patterns and the distribution and timing of stratification.

In the UK Initial Assessment (HM Government, 2012) an increase in the salinity of the north-western UK waters was related to a stronger inflow of subtropical waters in the area. Similarly, the deep waters of the northern North Sea were shown to be increasing salinity related to the inflow of these Atlantic waters. The coastal areas in the southern North Sea are more influenced by river inputs and they presented more variability and few clear trends except in the German Bight (beyond UK waters but included for context in the last assessment) where winter conditions were freshening in the presence of large year to year fluctuations. No clear trend in salinity was observed in the Western Channel or in the Irish Seas.

The winter bottom salinities are measured in the North Sea by the ICES International Trawl Survey Quarter 1 and shown for the period 1971-2012.

The UK Climate Projections (2009) suggested that the salinity will slightly decrease in the future in the shelf seas and adjacent ocean (a decrease of approximately 0.2 by 2070-2098). Change is thought to be weaker in the Celtic and Irish Sea (approximately 0.1). The uncertainty of salinity in these projections is very high and will likely change as models develop.

The salinity of the upper ocean (0-800m water depth) to the West and North of the UK has generally increased over the last 4 decades but decreased sharply from 2011 on, reaching values below the long-term mean (1981-2010) in 2014 in Rockall Trough and in 2013 and 2015 in the Faroe-Shetland Channel (Figure 1 and 2). This decrease in salinity is consistent with the short-term decrease in temperature reflecting a changing balance of the inflow of subtropical (salty) versus subpolar (fresh) water into the area.

In the northern North Sea (Fair Isle station), salinity is influenced by the inflow of Atlantic water with significant year-to-year variations. No clear long-term trend is observed in the Fair Isle current, but in 2013-2015 salinity was below the long-term mean.

For the Southern North Sea, salinity is controlled by a balance of freshwater supply from the surrounding catchments in the UK and Northern Europe and by changes in the transport of Atlantic origin water through the Dover Strait and from the north. Two stations are available in the Southern North Sea, one near Felixstowe (UK) and Helgoland (Germany), which both demonstrate high interannual variability, experienced a notably fresh period in the 1980s, and show no clear trend since they recovered to a more typical salinity in the 1990s. Figure 1 illustrates the salinity anomalies at the stations described above with respect to the standard deviation of the period 1981-2010.

Figure 1. Standardized salinity anomaly in upper layer at stations around the UK and in the German Bight during the period 2006-2015. The anomalies are relative to the mean and normalized by the standard deviation of salinity at each station for the period 1981-2010, for example a value of +2 indicates that the data are 2 standard deviations above the mean salinity. This table was extracted from the ICES Report on Ocean Climate 2015 - Larsen and others, (2016). 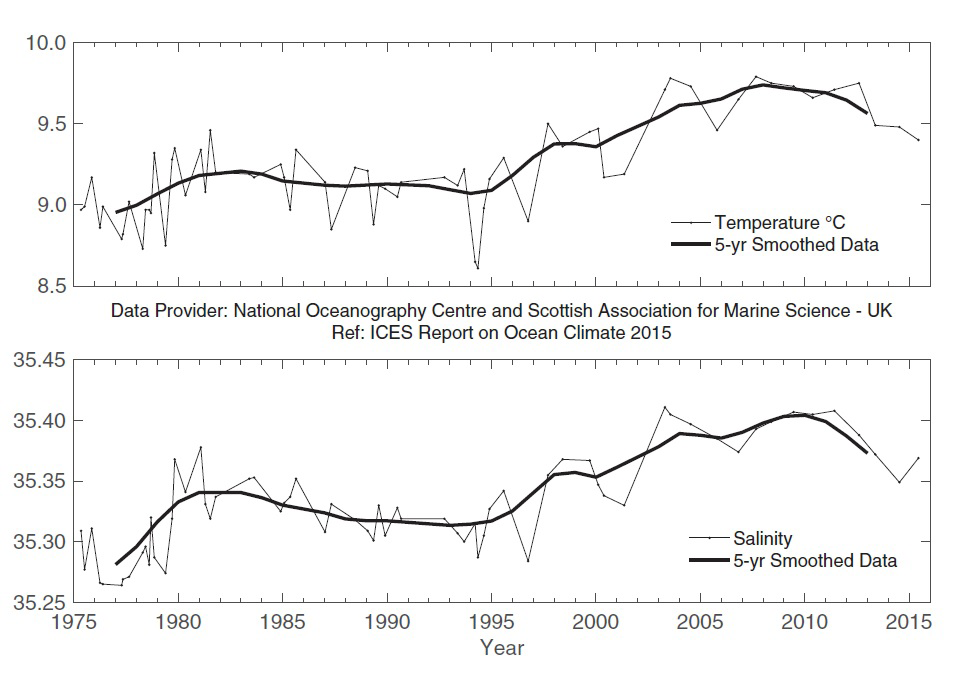 To the west of the UK in the Rockall Trough the water at depths greater than 1500m have been freshening over the last 40 years. This is thought to be a lagged effect of the freshening of the Labrador Sea (where this deep water is formed).

Linear trends in winter bottom-water salinity of the North Sea have been analysed for the period 1971-2012 (Figure 3) and show increasing salinity in the north of the area. The trend is weaker further south where the spatial variability is also relatively high. This positive trend in the northern North Sea is likely to be related to the increasing salinity observed in North Atlantic waters up to 2011. 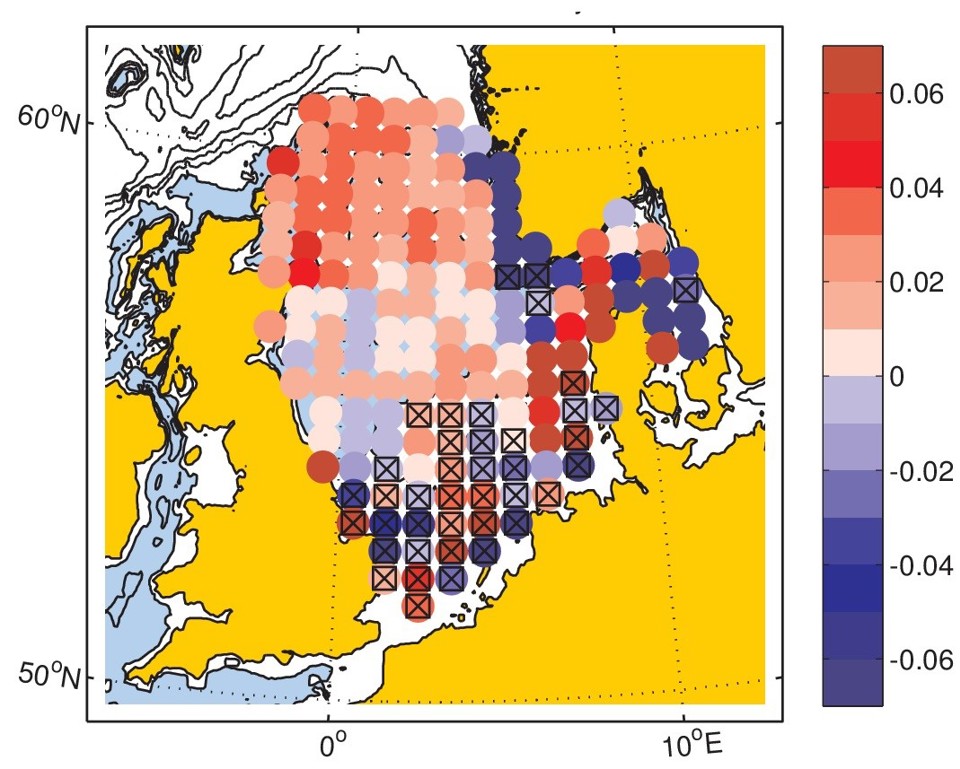 Salinity data are generally sparse in comparison to temperature data and so confidence in the assessments of long-term trends and spatial variability is lower. Data is particularly scarce in deeper waters both on and off the European shelf. Further under-sampling of seasonal variability adds difficulty for interpreting long-term change. The Argo float programme and installation of thermo-salinographs on ferries and voluntary observing ships will help to reduce this gap for the deep ocean and shelf seas waters, respectively. Emerging technologies, such as autonomous gliders and integrating observations with models will help fill the gaps for future assessments. Uncertainties in shelf sea salinity associated with the supply of freshwater from rivers, rainfall and climate change are areas where our understanding can be improved.