The UK target was met in the Celtic Seas, but not in the Greater North Sea where 35% of species experienced frequent, widespread breeding failures between 2010 and 2015. In both sub-regions, the species that frequently failed to raise young, typically gulls and terns, feed on small fish at the surface.

This indicator is used to assess progress against the following target, which is set in the UK Marine Strategy Part One (HM Government, 2012): “At the scale of the Marine Strategy Framework Directive sub-regions marine bird productivity is not significantly affected by human activities: widespread seabird colony breeding failures should occur rarely in other species that are sensitive to changes in food availability.”

The extent and frequency of seabird breeding failure is used as an indicator of seabird population health. The indicator could provide evidence of fishing impacts where fisheries and seabirds target the same prey and other impacts from human disturbance, contaminants, and predation by invasive species such as rats. Natural factors may also affect this indicator, such as climate-driven changes in prey-fish availability, and predation and disturbance from native predators such as the fox. Distinguishing between natural effects and human impacts on breeding performance is not always possible.

Management measures at breeding colonies and in offshore areas that are protected by UK and European legislation are likely to help increase the resilience of seabirds to the impacts of climate change. There is evidence that the sandeel fishing closure off North-East England and East Scotland has had a positive impact on the breeding success of local kittiwake colonies. The recent change to smaller scale management of sandeel stocks may also have benefits for the seabirds that feed on them.

In the Celtic Seas and the Greater North Sea, a quarter or more of species showed frequent and widespread breeding failures during the period from 2010 to 2015 (Tables 3 and 4) Of the six water-column feeding species in the Greater North Sea and Celtic Seas, none showed frequent and widespread breeding failures during 2010 to 2015, compared to 36% (Celtic Seas) and 50% (Greater North Sea) of surface feeding species (Table 3). Surface-feeders forage on small fish, zooplankton and other invertebrates at or within the surface layer (within 1 to 2m of the surface); water column feeders actively dive below the surface to a broad range of depths to feed on fish and invertebrates such as squid and zooplankton in the water column or close to the seabed.

Table 3. Percentage of species that experienced frequent, widespread colony failures between 2010 and 2015.

Table 4. Number of years of widespread breeding failure of seabird species from 2010 to 2015 in the Greater North Sea and Celtic Seas. ‘Widespread breeding failure’ occurs when the percentage of colonies failing per year exceeds the mean percentage over the preceding 15 years for tern species or exceeds 5% for all other species. n.a. = not applicable: insufficient data or not breeding.

Breeding success is declining in the Celtic Seas and the Greater North Sea. In both sub-regions, more species (mainly surface feeders) experienced widespread failure between 2010 and 2015, than during the 2000s when the UK Initial Assessment (HM Government, 2012) was conducted (Figure 2). There is moderate/low confidence in the methodology used and moderate confidence in the data coverage. 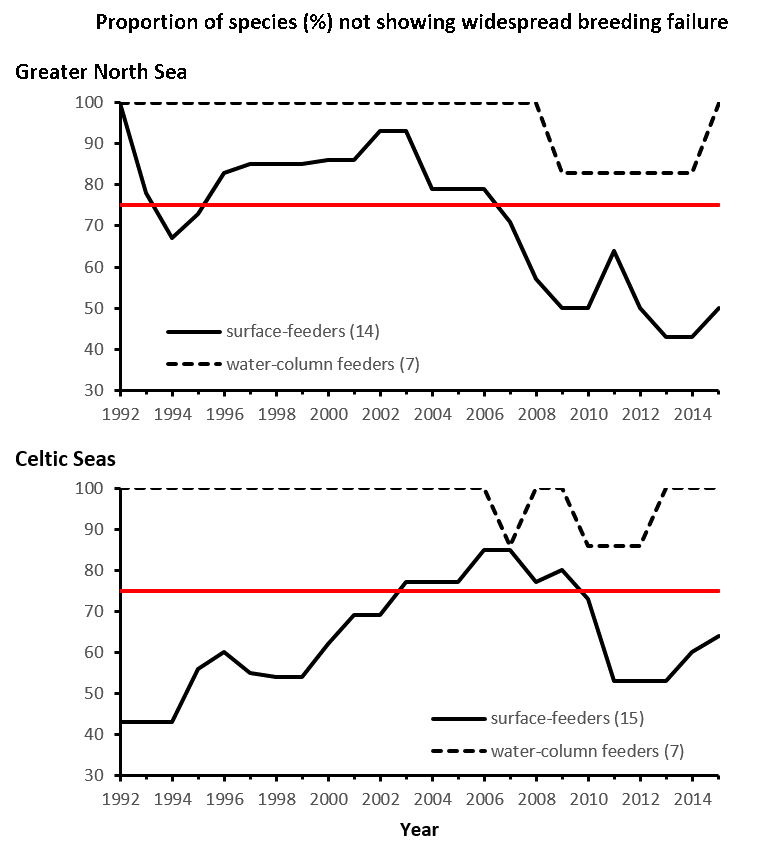 Figure 2. Changes in the proportion of marine bird species which have not experienced widespread annual colony failures in each year. The maximum number of species included per year in each group is shown in brackets in the figure legend. The number of species varied each year depending on data availability.

The UK target was met in the Celtic Seas, but not in the Greater North Sea, where 35% of species experienced frequent, widespread breeding failures between 2010 and 2015. In both sub-regions, the species that frequently failed to raise young all feed on small fish at the surface. Species that dive below the surface in pursuit of fish showed widespread breeding failures much less frequently. This would suggest the surface availability of small forage fish species including lesser sandeel and sprat is limiting the breeding success of surface-feeding species such as the black-legged kittiwake. Reductions in food availability could be a result of climate change or due to past and present fisheries.

The reduction of other pressures on seabirds through active management at colonies in the UK will help to enhance the resilience of the UK’s breeding seabirds to the impacts of climate change on their natural food supply.

Climate change effects on prey availability are likely to increase the incidence of widespread breeding failures in UK seabirds in the future. A better understanding of the impact of human activities is required to better manage the reduction of human impacts on breeding seabirds and increase their resilience to the effects of climate change. For instance, can this indicator be used to inform the management of sandeels?