The UK target was met at kittiwake colonies on the UK mainland coast of the North Sea, but no colonies passed the assessment in Shetland and Orkney, where the population is in steep decline. The reasons for the poor breeding success in the Northern Isles are unclear.

This indicator on kittiwake breeding success (Figure 1) is used to assess progress against the following target, which is set in the UK Marine Strategy Part One (HM Government, 2012): “At the scale of the Marine Strategy Framework Directive, sub-regions marine bird productivity is not significantly affected by human activities: Annual breeding success of black-legged kittiwakes should not be significantly different, statistically, from levels expected under prevailing climatic conditions such as sea surface temperature.” 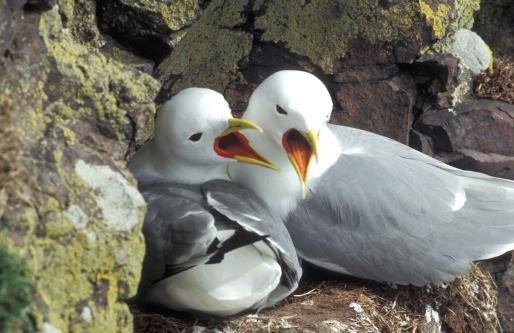 Seabirds breeding in the UK and elsewhere in the North-East Atlantic have experienced declines in abundance and frequent, widespread breeding failures over the last two decades. These declines are thought to be caused by a shortage of the small shoaling fish that seabirds feed on, which has been attributed to both warming seas and commercial sandeel fishing.

This indicator aims to distinguish between the effects of prevailing climatic conditions and those that may have resulted from human activities such as fishing. Kittiwakes are particularly susceptible to food shortages because they rely on fish being close to the surface to feed on them. Kittiwake breeding success data are therefore used in this indicator.

Since 2000, an area off North-East England and East Scotland has been closed to sandeel fishing to help with the recovery of breeding success of local kittiwake colonies. Voluntary bans on sandeel fishing in Shetland have also been in place, and no sandeels were landed there during 2004 to 2015. A seasonal ban on sandeel fishing across the entire North Sea was imposed for the first time from August to March 2016. This indicator could help to monitor the effectiveness of such measures.

This indicator was not considered as part of the 2012 Initial Assessment (HM Government, 2012). 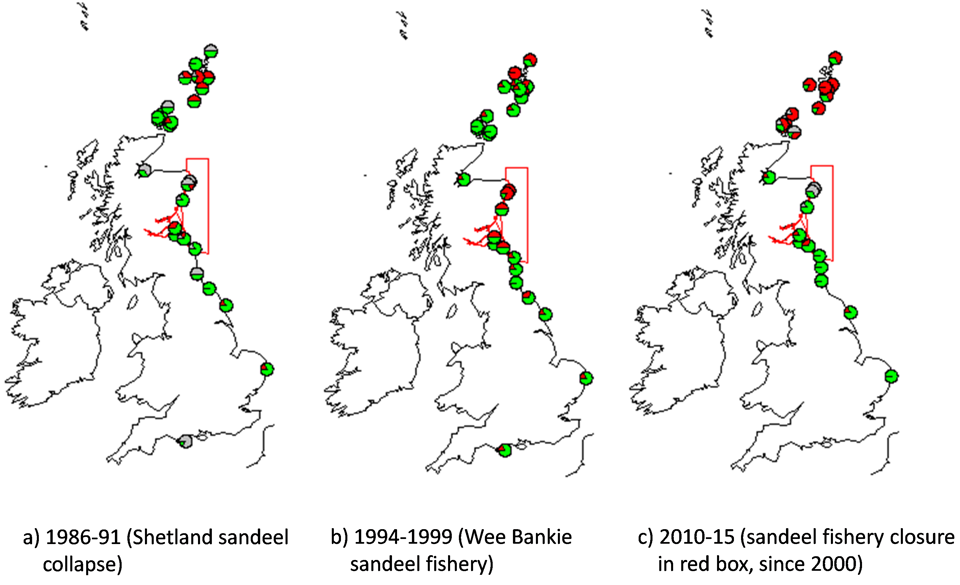 Figure 8. Proportion of years in which the target breeding success was met in each colony during the most recent 6-year assessment period c) 2010 to 2015, compared to examples of other 6-year periods: a) 1986 to 1991 during the Shetland sandeel collapse and b) 1994 to 1999 when the Wee Bankie sandeel fishery was in operation. Pie charts: Grey denotes no breeding success values, green denotes breeding success was as expected by prevailing climatic conditions and red denotes that it was not. Red line denotes limits of sandeel fishing ban in place since the year 2000. 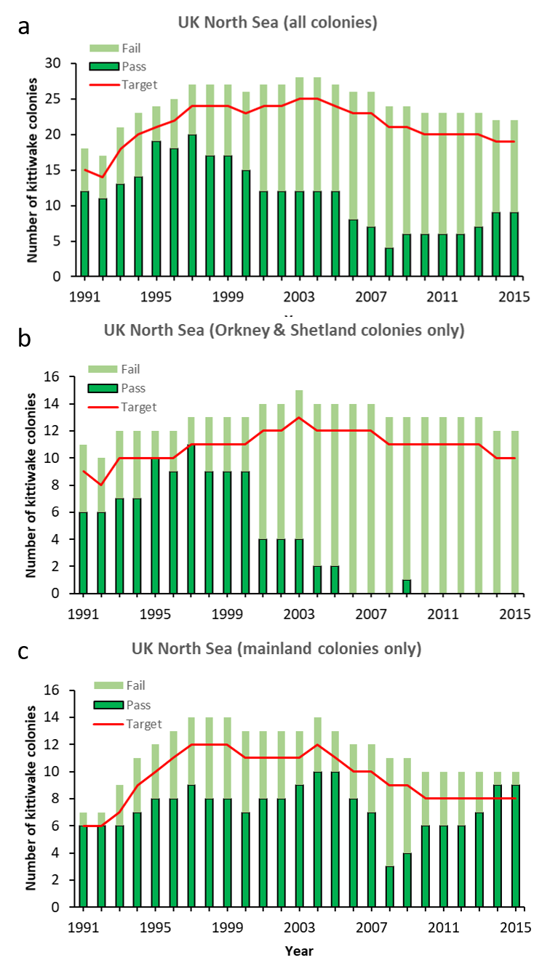 Figure 9. The proportion of assessed colonies where breeding success was in line with conditions (“pass”) and not in line with “fail”) prevailing climatic conditions in at least 5 of the previous six years. Each annual value represents an assessment for the period of the preceding six years, for example 1991 = 1986 to 1991 inclusive. The red line is the threshold for the number of colonies ‘passing’, at which the UK target is met.

The assessment for the period 2010 to 2015 above was repeated for each six-year period from 1986 onwards (Figure 9). Colonies on the British mainland are ‘improving,’ and colonies in Orkney and Shetland have been ‘declining.’ During the late 1980s, failure to meet the UK target was largely confined to Shetland colonies (see Figure 9a, assessment period 1986 to 2001). This was mostly likely due to a crash in the Shetland sandeel stock at that time which was caused by a change in currents and independent of sea-surface temperature. Breeding success at colonies in Shetland subsequently recovered temporarily during the early 1990s. During the 1990s, failure to meet the UK target was mainly restricted to colonies in eastern mainland Scotland that were adjacent to an area of high sandeel fishing pressure, which was subsequently closed to fishing from the year 2000 onwards (Figure 9b, assessment period 1994 to 1999). During the mid-2000s, failure to reach the UK target was widespread (Figure 9). Breeding success at UK colonies subsequently improved to be in line with prevailing conditions (Figure 9b). In contrast, all colonies in Orkney and Shetland, have not met the UK target in any six-year period since 2001 to 2006, except at one Shetland colony between 2004 and 2009 (Figure 9c).

The UK target was met for nine out of a sample of 10 colonies on the mainland during 2010 to 2015, where breeding success of kittiwakes was in line with prevailing climatic conditions in at least five years out of six. But in Shetland and Orkney, all 12 colonies assessed failed to meet the UK target during 2010 to 2015 and have failed to do so since the period 2001 to 2006.

It is unclear what has produced these poorer than expected levels of breeding success across Orkney and Shetland. It is unlikely to have been due to fishing pressure because no sandeels were landed in Shetland during 2004 to 2015 and no sandeel fishery exists around Orkney. But at some colonies at least, predation from great skuas is likely to be a major cause. Other factors could include extreme weather events such as heavy rain that results in the washing of nests from cliffs, along with changes in ocean currents.

Despite the lack of understanding of some of the causes of lower than expected kittiwake success, this indicator has enabled the breeding performance of kittiwakes and other seabirds to be put into the context of a changing and variable climate. In doing so, it suggests the sandeel fishing closure in eastern Scotland and North East England has been effective.

This indicator could be used with more confidence to inform management through improving understanding of: