The UK target for population size of non-breeding waterbirds was met in the Greater North Sea but not in the Celtic Seas. The target was not met for breeding seabirds in either sub-regions.

This indicator is used to assess progress against the following target, which is set in the UK Marine Strategy Part One (HM Government, 2012): “At the scale of the Marine Strategy Framework Directive sub-regions, the abundance of marine birds is not significantly affected by human activities. Changes in abundance of marine birds should be within individual target levels in 75% of species monitored.”

The main offshore pressures on seabirds arise from climate change and from fishing. Climate-driven shifts in the food chain have combined with the previous over-fishing, reducing the availability of small fish that seabirds feed on, such as lesser sandeels. Conversely, some species have previously benefited from food provided by the fishing industry through discards and may suffer because of new regulations that aim to eliminate discards. Surface-feeding seabirds, in particular, fulmars , ingest floating plastic particles, which is likely to have a negative effect on their health, though the impact of plastic pollution on seabird populations is currently unknown. The main pressures on waterbirds arise in coastal waters. They include contamination by hazardous substances, competition with shellfish harvesting, disturbance, and habitat loss. Climate change has also driven change in waterbird numbers by increasing winter survival and enabling a greater number to spend the winter further north and east within the UK and Europe.

Measures to protect seabirds from human activities are set out in the UK Marine Strategy Part Three (HM Government, 2015). These include those taken under the EU Birds and Habitat Directive (European Council 1992), the Common Fisheries Policy and UK By-catch plans. Management measures at Special Protected Areas and Marine Protected Areas are likely to help reduce impacts from human activities and thus increase the resilience of seabirds facing the negative impacts of climate change. Management measures at protected sites for waterbirds are aimed at reducing disturbance from human activities such as recreation, bait digging, and shellfish harvesting and from predators such as foxes.

This indicator, thresholds and targets were not used during the UK’s Initial Assessment, but the following conclusions were made:

Table 2: Percentage of species assessed that had a relative abundance in 2015 above the species-specific threshold values (0.7 or 0.8), in each functional group in the Greater North Sea (2014) and the Celtic Seas. 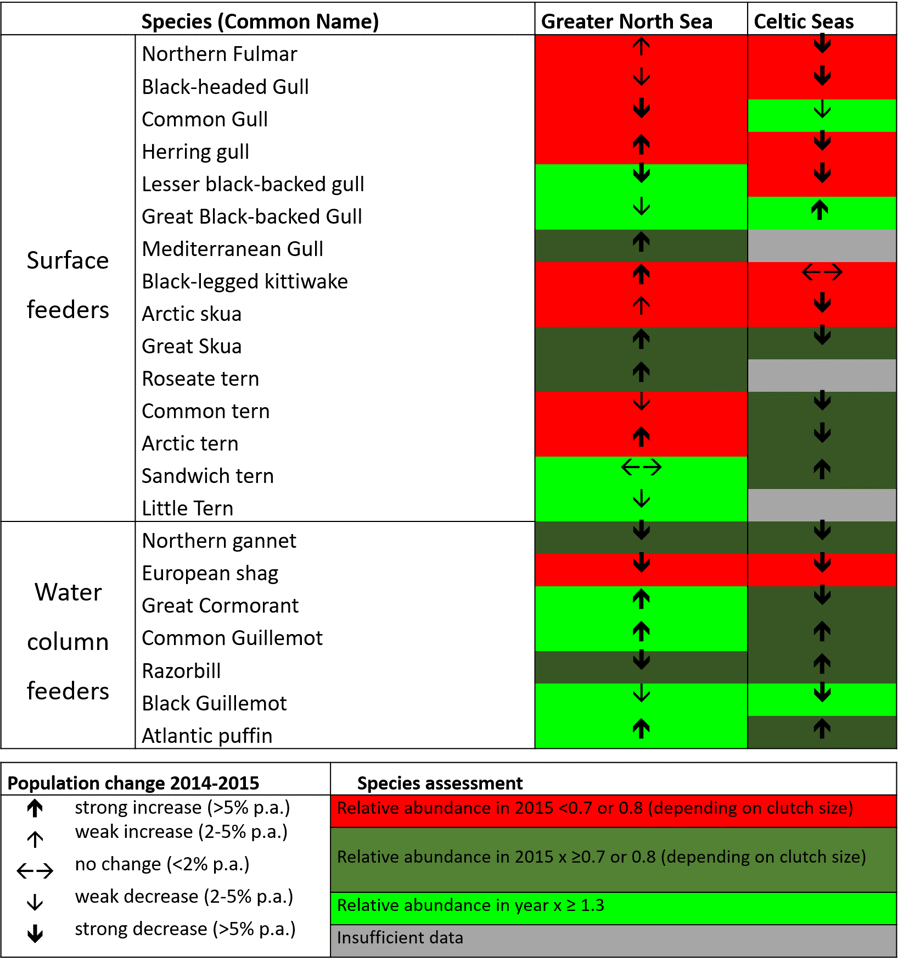 Figure 2. Species–specific assessment of relative breeding abundance of seabirds in 2014 in the Greater North Sea and in 2015 in the Celtic Seas. Species grouped by functional group.

Figure 3: Changes in the annual proportion of species meeting targets for a) relative breeding abundance and b) non-breeding abundance, during 1992 to 2015. The bold horizontal line denotes the target threshold of 75 % or more. The number of species.

There were no clear differences in the assessments between the five functional groups within the non-breeding waterbirds that visit the North Sea and Celtic Seas coasts during migration or during winter. However, species of seabird that feed on fish within the water column have fared much better than those that feed at the surface. The availability of small forage fish species such as the sandeel and sprat at the surface is likely limiting the breeding success of some species such as the black-legged kittiwake. Drivers of food availability are likely to be ecosystem-specific changes, possibly initiated by past and present fisheries, in combination with climate change.