In the Channel and the eastern Irish Sea, the health of the demersal fish community has improved since the 1990s, with an increasing contribution of species that attain a large size. In the central and southern North Sea and on the shelf edge to the west of Scotland, an imminent recovery in community health is unlikely, since the balance of species within communities, relative to the early 1980s, has shifted towards smaller species.

This indicator is used to assess progress against the following target, which is set in the UK Marine Strategy Part One (HM Government, 2012): ”the size composition of fish communities should not be impacted by human activity”.

Variation in the size composition of fish communities is indicative of a change in their status, such that communities with relatively high proportions of large fish are considered ‘healthy’. This size composition is dependent on species being present that have the potential to grow to large sizes. But, over long periods of time, fishing can lead to fish communities that are dominated by relatively small species that mature earlier and grow faster. Under high fishing levels, the mean maximum length of fish should decline gradually as fish communities are restructured. A fish community that is dominated by small species has less potential to recover to become one that is ‘healthy’ with a high proportion of large-sized fish. When overfished, the transfer of mass and energy from prey species to larger predators (trophic function) is reduced. Therefore, trends in the mean maximum length indicator will reflect a corresponding decline or improvement in species composition and therefore, fish community status.

The UK Marine Strategy Part Three (HM Government, 2015) states that all parts of the marine fish community have been impacted by human activities, but there have been recent improvements in the status of some of these fish communities primarily because of a reduction in fishing pressure. With the existing policy in place and the introduction of the reformed Common Fisheries Policy, it is expected that there will be a further reduction in the overall fishing pressure reducing fishing impacts on both target and non-target species and sensitive species.

The assessment was based on data collected by 13 groundfish surveys carried out across two UK Marine Strategy Framework Directive Sub-Regions, the Greater North Sea and Celtic Seas.

The mean maximum length of fish (bony fish and elasmobranchs) provides information on the species composition within communities of fish. The indicator is calculated using data on the biomass of fish per unit swept area caught by scientific surveys and a single trait for each species: maximum recorded length of an individual observed in the entire data set. Changes in mean maximum length over time were estimated separately for demersal fish species that live on or near the sea floor and for pelagic species that live in the water column. The lack of data prior to large-scale commercial fishing means it is difficult to determine what mean maximum length values have been indicative of healthy populations of demersal and pelagic fish. The time-series of data for most areas assessed started in the 1980s or 1990s when fishing pressure had been high for a number of years. For the UK target to be met, mean maximum length would be expected to be increasing compared to earlier points in the time-series. If mean maximum length is not increasing, further investigation is required to identify if a lack of recovery in species composition of communities is due to human activities, food web interactions, or prevailing climatic conditions.

No thresholds were set, but changes in mean maximum length were categorised as a (1) ‘long-term decrease to a minimum state’, (2) ‘long-term decrease’ (mean maximum length in the current period is lower than in an earlier period, but higher than a more recent one), (3) ‘long-term increase’ or (4) ‘no change’. The periods were identified using statistical analyses (see details in the Assessment Method section, below). Additionally, in each case, the minimum value observed over the time-series prior to the last 6-years, was considered as a lower limit that should be avoided in future.

This UK assessment has been adapted from the OSPAR Intermediate Assessment (OSPAR Commission, 2017).

Within the Celtic Seas, the mean maximum length of demersal fish communities has decreased along the shelf edge waters to the west and in the Clyde area, but increased in the Irish Sea, the Sea of the Hebrides and The Minch (Figure 3). For the pelagic fish community, mean maximum length has increased in the central Irish Sea, extending into the Celtic Sea but has decreased in many northerly areas to the west of Scotland. 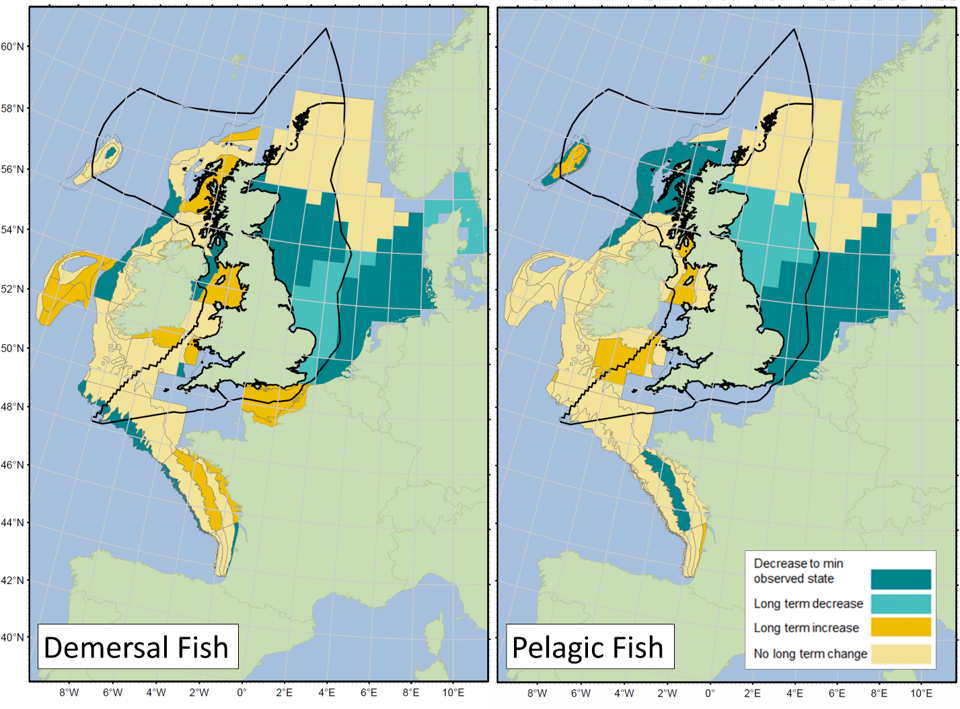 Figure 3. Summary of long-term changes in the mean maximum length of demersal fish (left) and pelagic fish (right) communities in UK waters and surrounding areas (exclusive economic zones shown by sold black line) in key surveys selected for spatial coverage (Table 1). Assessment period starts in 1980s or 1990s and ends in 2015 or 2016 depending on the survey.

In the Greater North Sea there was an overall decline in mean maximum length for both demersal and pelagic fish communities, which implies that the proportion of vulnerable species (large or slow-growing species with late maturity) is declining. However, in the English Channel demersal fish communities appear to be recovering.

In the Celtic Seas, there is no overall trend in mean maximum length, which has varied greatly over time, between surveys, and between sub-divisions, especially for demersal fish. But in some areas of the Celtic seas, there are increases in mean maximum length, which may indicate the start of the recovery in local communities as a result of a recent reduction in fishing mortality.