This indicator is used to assess progress against the following target, which is set in the UK Marine Strategy Part One (HM Government, 2012): “The size composition of fish communities should not be impacted by human activity such as to indicate any adverse change in trophic function within the community.

Over long periods of time, fishing leads to fish communities that are dominated by relatively small and young fish. Not only do fisheries preferentially select larger and older fish that tend to be prime breeders, but the simple reduction in biomass of a fish stock can lead to a truncation of the size-range present in the population. Under high fishing levels, the Typical Length of fish gradually declines as fish communities become dominated by smaller individuals that mature earlier and grow faster. When overfished, the transfer of mass and energy from prey species to larger predators (trophic function) is reduced. Therefore, trends in the Typical Length indicator will reflect a corresponding decline or improvement in the trophic function of the foodweb.

The UK Marine Strategy Part Three (HM Government, 2015) states that all parts of the marine fish community have been impacted by human activities, but there have been recent improvements in the status of some of these fish communities primarily as a result of a reduction in fishing pressure. With the existing policy in place and the introduction of the reformed Common Fisheries Policy, it is expected that there will be a further reduction in the overall fishing pressure reducing fishing impacts on both target and non-target species and sensitive species.

The assessment was based on data collected by 13 groundfish surveys carried out across two UK Marine Strategy Framework Directive Sub-Regions: Greater North Sea and Celtic Seas. Results from the OSPAR assessment (OSPAR Commission, 2017) in adjacent waters are shown for comparison.

The Typical Length represents the average length of fish (bony fish and elasmobranchs) and provides information on the size composition within communities of fish that are composed of many species. The indicator is calculated using data on the length of fish caught by scientific surveys. Changes in typical length over time were estimated separately for demersal fish species that live on or near the sea floor and for pelagic species that live in the water column.

The lack of data prior to large-scale commercial fishing means it is difficult to determine what Typical Length values have been indicative of sustainable populations of demersal and pelagic fish. The time-series of data for most areas assessed started in the 1980s or 1990s when fishing pressure had been high for some years. For the UK target to be met, Typical Length would be expected to be increasing compared to earlier points in the time-series. If Typical Length is not increasing, further investigation is required to identify if reductions in the size structure of communities are due to human activities, food web interactions or prevailing climatic conditions.

No thresholds were set, but changes in Typical Length were categorised as (1) ‘long-term decrease to a minimum state’, (2) ‘long-term decrease’ (typical length in the current period is lower than in an earlier period but higher than a more recent one), (3) ‘long-term increase’ or (4) ‘no change’. The periods were identified using statistical analyses (see details in the Assessment Method section, below). Additionally, in each case, the minimum value observed over the time-series prior to the last six-years, was considered as a lower limit that should be avoided in future

The UK has been the joint lead for this indicator in OSPAR, and the UK results have been used in the OSPAR Intermediate Assessment (OSPAR Commission, 2017).

Overall, the Typical Length of the assessed demersal fish community is low compared to the early 1980s (Figures 2 and 3). Areas of concern, with long-term decreases to lowest observed levels remain in the western and southern North Sea (Figure 2). Nevertheless, the demersal fish community at the Greater North Sea scale is recovering due to recent increases in Typical Length in some subdivisions with a high biomass of fish (Figure 2, left) including the Orkney/Shetland area in the northern North Sea and UK coast in the Channel. The pelagic fish community generally shows fluctuations without trend in the UK part of the North Sea. 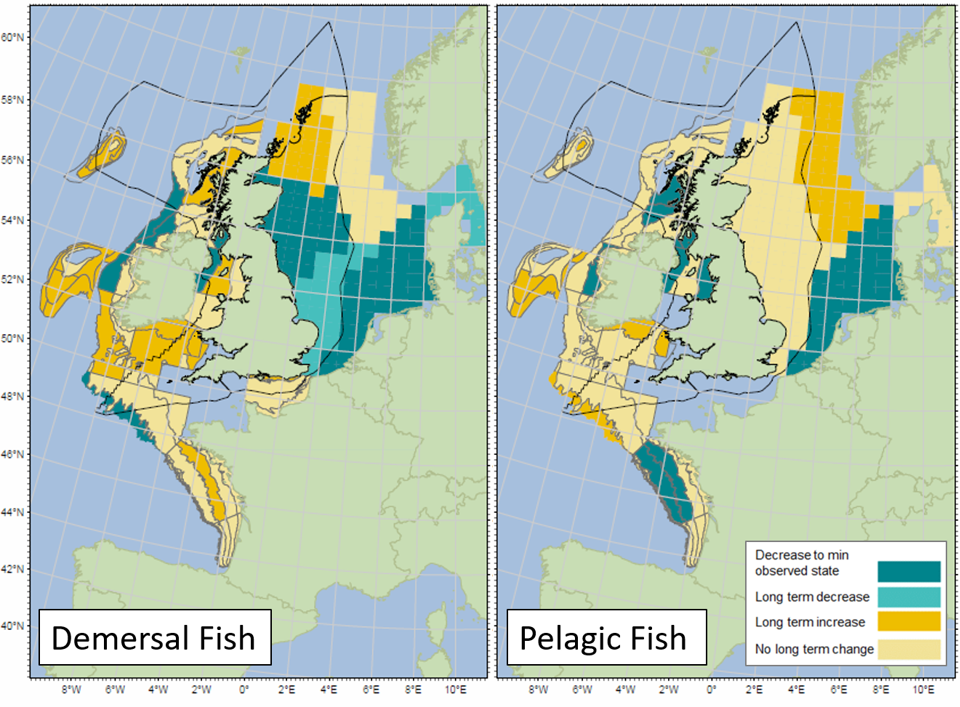 Figure 2. Summary of long-term changes in the typical Length of demersal fish (left) and pelagic fish (right) communities in UK waters and surrounding areas (Exclusive Economic Zones shown by a solid black line) in key surveys selected for spatial coverage (Table 1). Assessment period starts in the 1980s or 1990s and ends in 2015 or 2016 depending on the survey (see Figure 3).

Figure 3. Time series of the Typical Length of demersal fish (top plots) and pelagic fish (bottom plots) communities by surveys that sample strata that are located (fully or partially) within UK waters.

Although the multiple surveys showed mixed signals within the Celtic Seas region for the Typical Length of the demersal fish assemblage (Figure 3), surveys in the north of the area suggest some recovery from previous low states with increases to the west of Scotland (Figure 2, left). However, decreases are also apparent for shelf edge waters to the west. Elsewhere the picture is similarly mixed with decreases near the Irish coast of the Irish Sea (although not evident in the otter trawl surveys and in the Clyde area, but increases to the south of Ireland, Isle of Man, Sea of the Hebrides, and The Minch.

The typical length of pelagic fish generally shows no long-term change at the Sub-Regional level (Figure 3). However, sub-divisional increases are seen to the south of Ireland and decrease in some northerly areas including the Sea of the Hebrides and coastal areas in the Irish Sea (Figure 2, right).

The UK target has probably not been met in the UK North Sea nor the UK Celtic Seas. In the North Sea, the Typical Length of demersal fish remains relatively low, but recovery since 2010 is underway, which is driven by increases in the northern North Sea. Long-term decreases, since the 1980s, were evident in the southern and central North Sea, implying that the demersal fish communities there are more dominated by small-bodied fish at present. In contrast, no change was evident in the North Sea pelagic fish community. Within the UK waters of the Celtic Seas either no change or long-term increases were observed throughout much of the area (with the exception of one survey). Some decreases were detected at smaller scales. Recovery appears underway in the demersal fish communities since 2000 in the West of Scotland and Rockall Bank area.

Further work is required to evaluate appropriate baselines and thresholds for this indicator. This work is needed because any historical baseline for the fish and elasmobranch community is likely to represent an impacted state. Thresholds should preferably be identified through multi-species modelling.