Overall, litter is widespread on the seafloor across the entire UK, with plastic the predominant material. More data is required to make a full assessment of the trend in the amount of seafloor litter in specific areas of UK waters. There were higher amounts of litter and plastic per square kilometre of seafloor in the Greater North Sea compared to the Celtic Seas, and higher amounts of litter in the southern parts of the Greater North Sea and Celtic Seas which could be a result of increasing human pressures.

Marine litter represents a global problem, with increasing quantities documented in recent decades. The abundance of litter on the seabed is influenced by human inputs and rivers and currents, which can transport and redistribute litter over long distances making it a transboundary problem.

Marine animals can ingest or become entangled in litter on or near the seafloor. Plastic items can also damage or smother areas of the seafloor destroying fragile benthic habitats, preventing photosynthesis and the movement of animals and nutrients.

Litter levels were mapped over the area of the surveys (this is using data combined over the years, although similar patterns are shown for the individual years) and are shown in Figures 2 and 3. 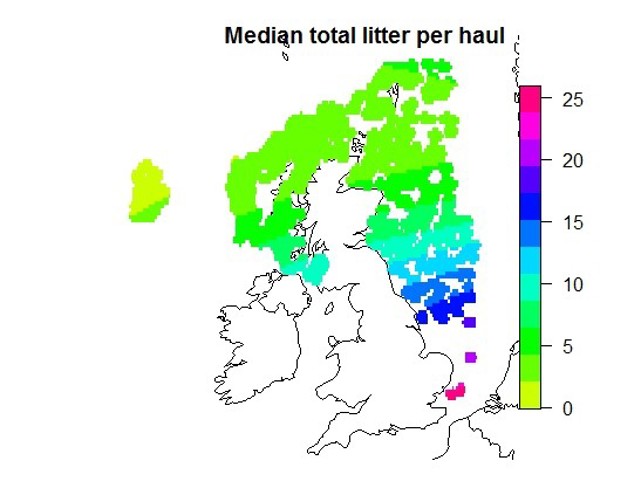 The distribution and abundance of marine litter on the UK seafloor was investigated using data collected by UK Exclusive Economic Zone trawl surveys and assessed by Marine Strategy Framework Directive sub-regions (Greater North Sea and Celtic Seas). Sampled litter quantities are not absolute numbers but represent a relative number. Widespread distribution of litter items, especially plastics, was discovered on the seabed of the Greater North Sea and the Celtic Seas (Figure 3). The Celtic Seas area contained, on average, significantly fewer items per square kilometre compared to the Greater North Sea area. Different types of litter items were detected in the trawls, especially pieces of plastic sheeting, bags and bottles, metallic objects, glass, and diverse materials including fishing gear. Items of natural origin, like driftwood and branches were less prominent. Data shows that plastic is the most prominent litter type. With only limited years’ data for Greater North Sea and Celtic Seas, we have not attempted to look at trends in litter. While differences are seen between years, this may just be short-term fluctuations and at least 5 years of data would be needed to make confident statements about trends.

There is evidence of seafloor litter across all areas of the UK. Data shows that the amount of litter on the seafloor is higher in southern waters than in northern waters and southern seafloors have a greater proportion of plastic litter than those in northern regions. While it is noted that further monitoring is required before a trend in litter levels can be fully made, this assessment has shown that the current sampling regime is sufficient to detect change and the effectiveness of measures over a longer timescale.

Longer time series and better coverage of the southern Celtic Sea are required to improve the assessment.