The UK target for beach litter has not been met. Where the source of litter could be determined, the public are the primary contributor. The persistence of plastic means litter already in the marine environment the effectiveness of any measures will be slow to be reflected in data trends.

This indicator assessment describes the types and amounts of litter on UK beaches and reflects changes in sources of litter found on beaches.

Marine litter can directly harm wildlife by entanglement and ingestion. Entanglement can reduce movement and potentially result in serious injury, death by starvation, drowning or suffocation. Ingestion can lead to internal injuries, a false sense of satiation and reproductive problems.

Coastal communities, many of which rely on the marine environment for their livelihood through tourism, fishing and recreational water sports, are also negatively affected by marine and coastal litter. Revenue is lost through spoilt fish catches, lost tourism income, and damage to property. Sewage-related debris on beaches can have adverse effects on tourism. Local authorities, and ultimately taxpayers, bear the huge financial burden of clearing litter from UK beaches.

Plastic can take hundreds of years to degrade; it’s persistence in the environment means that it accumulates, and levels are difficult to reduce unless the material is physically removed.

Measures for addressing the impacts of litter are described in the UK Marine Strategy Part Three (HM Government, 2015). Since 2012, the carrier bag charges have been introduced across the whole of the UK and a ban on plastic microbeads in rinse-off personal care products has been introduced. At a regional level, the UK contributes to the implementation of measures through the OSPAR Regional Action Plan. At the national level further measures are being investigated, for example to reduce usage of single-use plastics and cotton bud sticks. 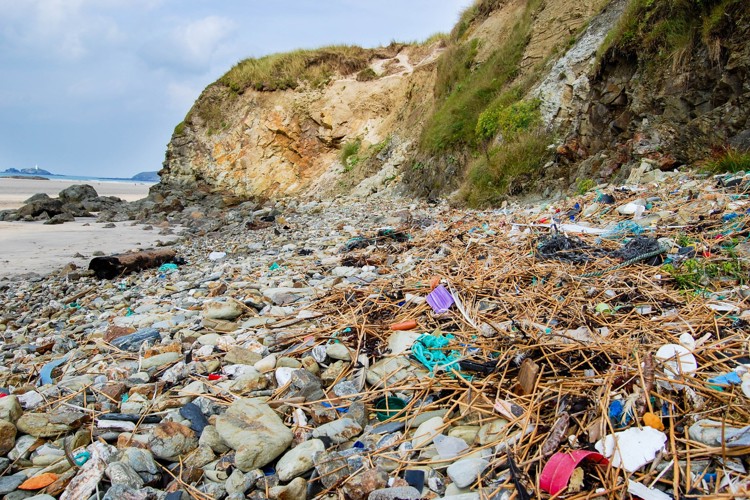 In the 2012 UK initial assessment, levels of marine litter were considered problematic in all areas where there were systematic surveys of beached litter density. There was limited information from the northern part of the Celtic Seas sub-region due to a low number of accessible beaches in this area. Latest findings for the Greater North Sea and Celtic Seas indicate that the average total abundance of litter items per 100m of coast varies considerably around the UK. Greater quantities were recorded in the Celtic Seas region (average 296/100 m ranging between 230 and 367) than in the Greater North Sea region (average 196 items/100 m ranging from 140 to 282). In the Celtic Seas after showing some decrease from 2011 to 2013 litter levels have risen to 2008 levels, while in the Greater North Sea area there has been an increase in litter levels.

The Northern Ireland data shows that apart from a peak in winter 2013 litter levels have remained at much the same levels from 2012 to 2014, averaging around 387 items/100m. The 2013 winter peak is mainly due to a large increase in the number of plastic fragments recorded together with an increase in the number of plastic drinks bottles and lids. Winter storms are likely to have caused more litter to have been washed onto shore.

In the Great North Sea and Celtic Seas, the majority of litter items were made of plastic or polystyrene. Plastic and polystyrene fragments are the most commonly found type of litter item, followed by food and drinks packaging, sewage related debris and then smaller amounts of fishing-related litter. Packaging mainly consists of plastic items including caps and lids, drinks bottles, food containers and crisp/sweet packets/lolly sticks. Cotton bud sticks, an indication of sewage-related debris,show a marked decrease from 2012 in the Celtic Seas while increasing in the Greater North seas during the same period. Plastic drinks bottles are among the most recorded items at all survey sites but show no significant trends in abundance. The number of plastic bags has remained fairly constant in the Celtic Seas, while increasing slightly in the Greater North Seas.

As with the UK data on Northern Ireland Beaches, the most common litter materials are plastics (including polystyrene). Fragments of these are the most common litter items found along with high numbers of plastic string pieces. Plastic drink bottles along with plastic lids, crisp and sweet packets, lolly sticks, cotton bud sticks, and metal cans are always among the top twenty items found. Items found more commonly in Northern Ireland on these beaches include shotgun cartridges and thick rubber gloves (generally assigned to the fishing industry).

Litter surveys on UK beaches indicate that litter pollution is still common and is not decreasing. The main litter types recorded are fragments of litter, mainly plastic and polystyrene, and food and drinks packaging.

There are large numbers of litter items considered harmful to the marine environment due to their potential threat of entanglement, ingestion, or injury. This is in addition to the socio-economic harm that all litter items cause through lost revenue and additional costs such as thorough beach litter cleaning.

The implementation of national measures, including the charge on plastic bags and those taken through the ‘OSPAR Regional Action Plan on Marine Litter’ should contribute to reductions in the quantities of litter in the coming years.

Distribution and number of survey sites

There is a lack of surveyed beaches along much of North-West Scotland. This is often a question of access to these areas and although increased numbers may give a better picture of the beach and marine litter, access could be problematic.