The UK has achieved the operational target for impulsive sound through the development of the Marine Noise Registry. In 2015 this was used to record impulsive sound from various activities in the Greater North Sea and the Celtic Seas.

This indicator is used to assess progress against the operational target set out in the Marine Strategy Part One (HM Government, 2012) which is to establish a ‘noise registry’ to record the distribution and timing of man-made impulsive sound sources measured over the frequency band 10 Hz to 10 kHz, exceeding the energy source level 186 dB re1μPa²m²s, or the zero-to-peak source level of 224 dB re1μPa²m² over the entire UK oil and gas licence block area. The UK achieved this target through developing the Marine Noise Registry which is now in use.

Underwater impulsive sounds are generated by certain human activities such as geophysical surveys, impact pile driving, naval sonar, acoustic deterrent devices, multi-beam echosounders, and detonation of explosives. There is considerable evidence for the effects of impulsive sound on individual marine organisms. The effects on individuals can be subtle (for example hearing sensitivity reduction, physiological stress) or obvious (such as changes in behaviour, death); however, there is uncertainty over the potential impacts on populations and ecosystems.

Potential physical impacts of impulsive sound generated by human activities on marine life are recognised and routinely managed through activity licences which require the implementation of mitigation measures to avoid/reduce effects. The Marine Noise Registry was designed to gather data in order to monitor cumulative pressure, assess the potential for disturbance impacts, and if needed, further manage activities. If appropriate, further management measures will be set out in the update to UK Marine Strategy Part Three (HM Government, 2015) in 2021.

Findings from the 2012 UK Initial Assessment (HM Government, 2012) stated that “there is currently not enough evidence to provide a quantitative assessment of the current status and trends of underwater noise in UK seas due to lack of available information from monitoring studies.”

The UK has achieved the operational target for loud, low to mid frequency impulsive noise as set out in the UK Marine Strategy Part One (HM Government, 2012) through the development of the Marine Noise Registry, which is now active.

In 2015 the Marine Noise Registry collected monitoring data for impulsive sound generated by the following activities:

The Marine Noise Registry collates these records so that a UK-scale map can be produced cataloguing the distribution and duration of impulsive underwater sound (Figure 2). Figure 3 shows the location of impulsive noise generating activities in 2015.

In 2015 impulsive sound, especially from seismic surveys, was found to be prevalent in the Greater North Seas, but some events were also recorded in the Celtic Seas, including the deep waters off the northwest coast of Scotland, and in the western English Channel and Irish Sea (Figures 2 and 3). Data from subsequent years are required before a comprehensive quantitative assessment of the status and trends of impulsive sound in UK seas can be completed. Further research, monitoring, and assessment is required.

No trend assessment has been possible in this assessment. 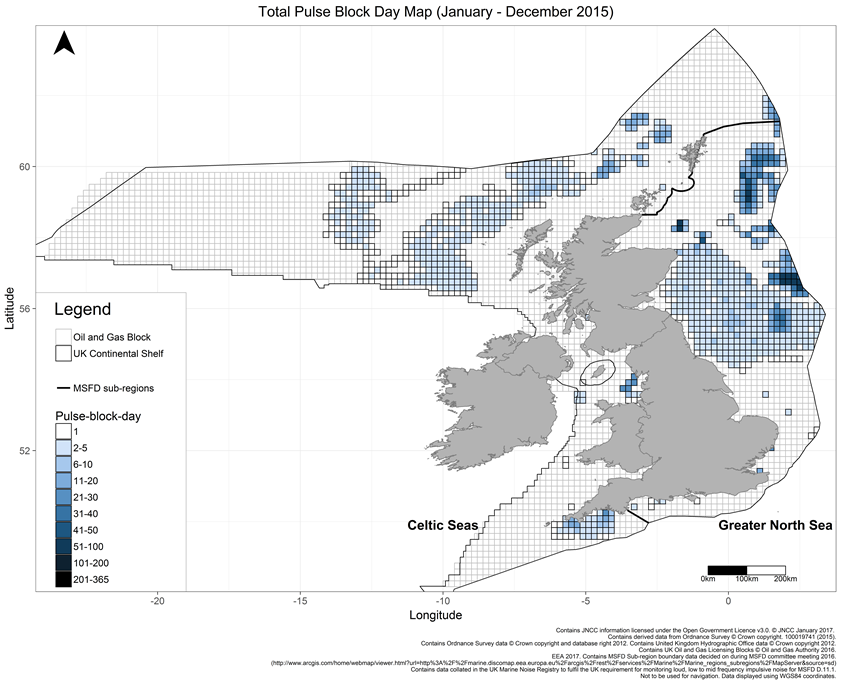 In 2012 there was no evidence available to suggest that current levels of noise in UK waters were having an impact at the population level on cetaceans or other noise sensitive marine animals. To address the lack of evidence a Marine Noise Registry has been developed and the UK has now achieved the operational target for loud, low to mid frequency impulsive sound, as set by the UK Marine Strategy Part One (HM Government, 2012). The Marine Noise Registry collects information on the distribution and duration of impulsive sound in UK waters. It currently contains data for one year, 2015, and intends to continue collecting data into the future. This will establish a baseline for impulsive sound in UK seas, allowing for assessment of patterns and trends.

Further evidence and research would help to better understand whether current levels of noise are having an impact on marine ecosystems and noise sensitive marine animals at a population level.