The availability and quality of data for assessment in the UK's Great North Sea and Celtic Seas sub-regions meant it was not possible to produce a robust trend analysis, but it is possible to say, with low confidence, that there was no significant change over time (2009 and 2014) in numbers of newly recorded non-indigenous species in UK waters.

This indicator is used to assess progress against the target set in the Marine Strategy Part One (HM Government, 2012), which requires a reduction in the risk of introduction and spread of non-indigenous species through improved management of high-risk pathways and vectors.

Non-indigenous species are organisms that have been moved into new areas outside their natural range by human activities such as shipping, recreational boating and aquaculture (for example, Figure 1). The presence of these species can exert significant impacts on the marine environment and may result in social and economic impacts. 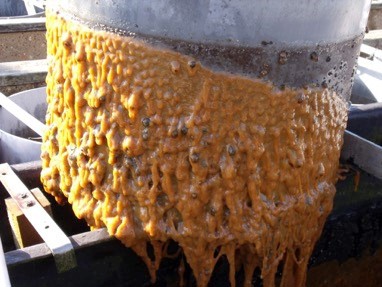 Figure 1. The invasive sea squirt, Didemnum vexillum, covering a holding tank at an oyster rearing unit in the UK.

Limiting the introduction of non-indigenous species is the most cost-effective way of reducing the pressures and impacts they can cause. Measures to reduce the number of new introductions have been set out in the UK Marine Strategy Part Three (HM Government, 2015) and include the implementation of a number of existing statutory and voluntary measures to manage key pathways and vectors.

The assessment of newly recorded non-indigenous species took place in the UK portion of the Greater North Sea and the Celtic Seas.

This assessment is based on historical data. The majority of these historical records comes from secondary sources, such as scientific studies, citizen science or chance observations, although some come from dedicated programmes designed to look for non-indigenous species. A monitoring initiative for non-indigenous species was introduced in 2016 in recognition of the threat that they can pose.

No assessment threshold is currently set but work is underway in OSPAR to address this.

The UK is the indicator lead in OSPAR and the UK results are being used in the OSPAR Intermediate Assessment 2017.

Around 60 non-indigenous species have become established in UK seas and this number is increasing. The impacts of most concern are those on intertidal and shallow subtidal habitats, particularly around the south and south-western coasts of the UK, where studies suggested there are more non-indigenous species compared to the rest of the UK.

More non-indigenous species were recorded in the Celtic Seas compared to the Greater North Sea during the assessment period, although there was no significant change over time in the number of new records in either region. These results for UK waters are comparable to those for the wider OSPAR Regions. Precautionary interpretation of the data below is required given the lack of consistent monitoring historically. 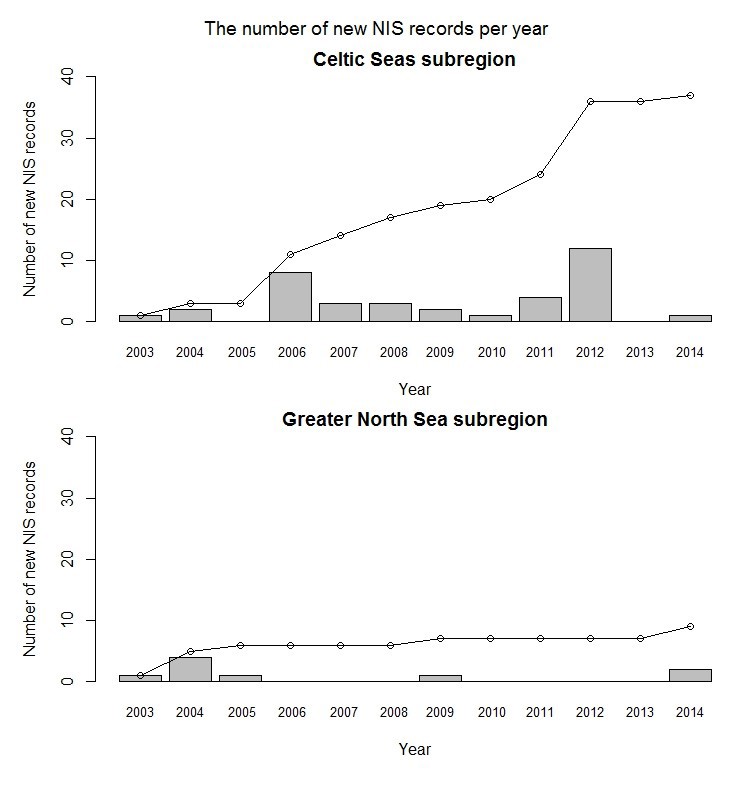 Figure 2. The number of newly recorded non-indigenous species per year (bars) and the cumulative total (line) in each UK sub-region (Celtic Seas and Greater North Sea).

The availability and quality of the data meant that it was not possible to produce a robust trend analysis, but it has been possible to say with low confidence that there was no significant change over time in the number of newly recorded non-indigenous species in either region.

It is difficult to say from this assessment if the UK target has been met. The numbers of newly recorded non-indigenous species in both UK sub-regions do not appear to vary a great deal over time. More have been recorded in the UK Celtic Seas than in the UK North Sea. The lack of consistent monitoring effort and/or reporting over the assessment period is likely to be the major compounding factor in interpreting these results. Introductions may have been recorded sometime after the introduction event occurred or was missed entirely. This may especially be the case at locations where introductions are most likely to occur, such as ports and marinas where there is limited monitoring effort. It is therefore difficult to say with confidence whether existing measures for the management of high risk pathways and vectors have had an effect in reducing the rate of introduction and if the UK target has been met. New monitoring initiatives for non-indigenous species instigated in 2016 should provide consistency in detection effort and may improve the quality of data and our confidence in future assessments of introduction, while also facilitating assessments of spread.