The UK target was met for grey seal abundance across its range in the UK, where the species has been increasing. The UK target for harbour seal abundance has not been met in the Greater North Sea and in the Celtic Seas, and the assessment was uncertain. Harbour seal abundance is stable or increasing along the English North Sea coast but has declined along the Scottish North Sea coast. The causes of these declines are currently unknown, although a number of potential factors have been discounted as causal factors of the decline. For the Celtic Seas, there was a significant increase in abundance in west Scotland where the majority of harbour seals are, but there was inconclusive evidence of declines elsewhere.

UK target on changes in the abundance and distribution of seals

This indicator is used to assess progress against the following targets, which are set in the UK Marine Strategy Part One (HM Government, 2012) for each of the two species of seal native to UK waters (Atlantic grey seal (Figure 1) and the harbour seal (Figure 2)):

Population size: At the scale of the Marine Strategy Framework Directive sub-regions, abundance of seals is not decreasing as a result of human activity. In all of the indicators monitored, there should be no statistically significant decrease in abundance of marine mammals caused by human activities. 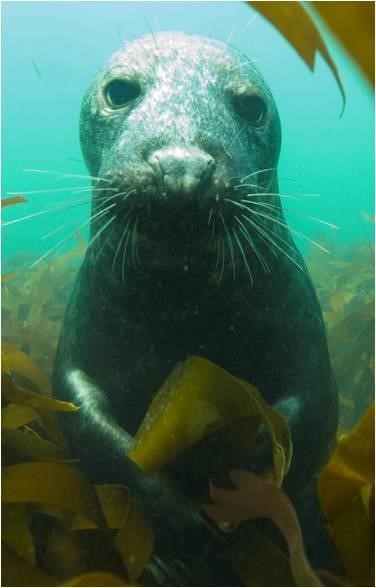 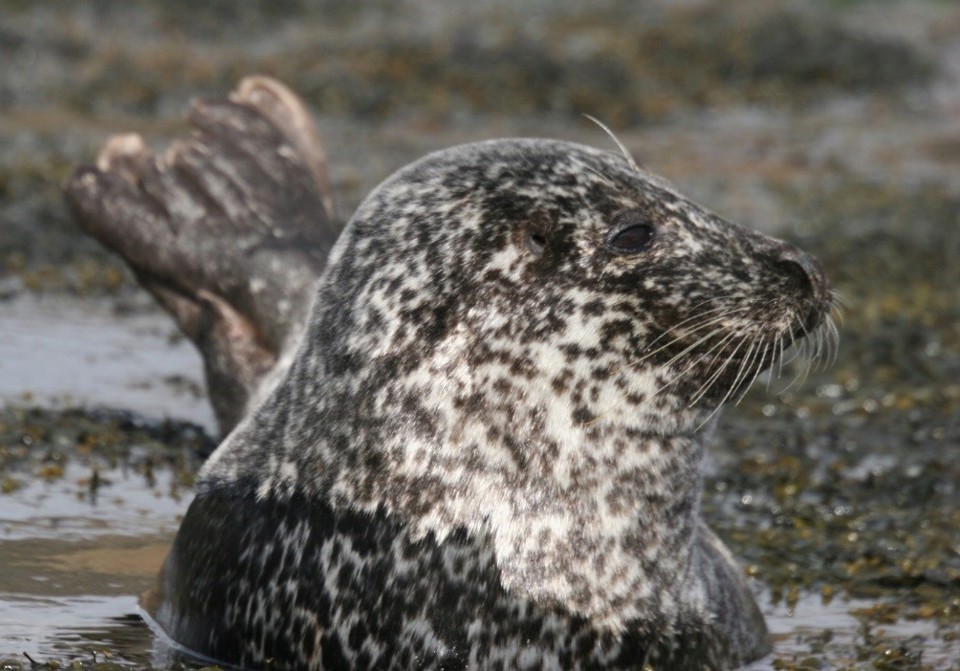 Disease, competition with other species, changes in distribution and abundance of their prey, and disturbance and interactions with fisheries can all affect seal abundance and distribution. Seals were hunted into the 20th century but are now protected from such activity throughout the UK.

Measures to protect seals are set out in the UK Marine Strategy Part Three (HM Government, 2015). These include protection through many national, European, and international conventions, agreements, and regulations that aim to manage the impacts of human activities on the seal population.

The European population of harbour seals has been subdivided into a number of assessment units while the grey seal population was assessed as a single spatial unit (Figure 3). OSPAR was advised on the use of these units by The International Council for the Exploration of the Sea. The single grey seal assessment unit covers the whole of the Greater North Sea (using data from other North Sea countries) and the UK parts of the Celtic Seas (data from the Republic of Ireland were not available). However, grey seal distribution was assessed using the smaller assessment units already defined for harbour seals to provide smaller scale resolution.

This indicator uses estimates of seal numbers from monitoring programmes that count seals on land when they are moulting (harbour seal) or breeding (grey seal). Trends in the abundance of harbour seals counted during the annual moult in August were assessed within each assessment unit. Because the single large spatial unit for grey seals covers colonies beyond UK waters, the total abundance of grey seals was modelled using both summer counts of grey seals and counts of pups at grey seal colonies during the autumn and winter. Trends in both species were assessed over the short-term (2009 to 2014) and the long-term (1992 to 2014, for most areas).

The target for population size in each assessment unit was met when a) seal abundance during 2009 to 2014 declined by less than an average of 1% per year, or b) seal abundance decreased by less than 25% since the baseline year (1992 or start of time series, if later). These thresholds are based on those used by OSPAR in its Intermediate Assessment (OSPAR Commission, 2017).

Changes in distribution were only used as a ‘surveillance indicator’ to help interpret changes in abundance. Therefore, the distribution metrics were not compared with any thresholds.

This UK has led this indicator assessment as part of the OSPAR Intermediate Assessment 2017 (OSPAR Commission, 2017).

Harbour seal numbers had declined significantly, by more than 50 % since 2001, in Shetland, Orkney and the East Coast of Scotland (HM Government, 2012). There had been a smaller decline in the Outer Hebrides while numbers on the West Coast of Scotland had remained relatively stable (HM Government, 2012). The causes of these localised declines were unknown. Elsewhere, harbour seal numbers had increased. In contrast and following the end of culling in the 1970s, the grey seal population had continued to increase annually (HM Government, 2012). However, pup production appeared to be stabilising, with only a small number of colonies still showing evidence of continued increases.

Harbour seal occupancy (the presence of harbour seals) of haul-out sites has either increased or remained the same in most assessment units in the Greater North Sea and the UK parts of the Celtic Seas. A notable exception is in East Scotland (assessment unit 8) where abundance has declined dramatically since the mid-2000s, and the number of occupied areas has changed from seven out of a total of nine surveyed in the period 2003 to 2008- to four out of six surveyed in the period 2009 to 2014.

The UK target for harbour seal in the Greater North Sea has not been met and is uncertain for the Celtic Seas. 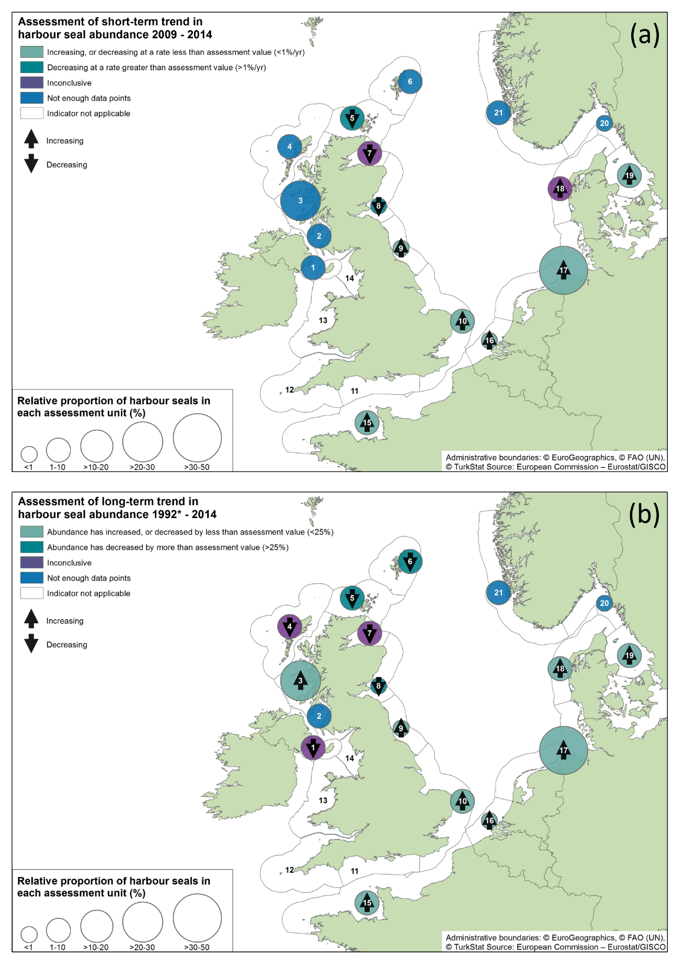 Grey seal abundance in the Greater North Sea and in the UK parts of the Celtic Seas has increased since 1992. Changes in the number of grey seal breeding colonies occupied (. distributional change) between 2003 and 2008 and 2009 to 2014 were generally positive, or unchanged.

The UK target has been met in both Marine Strategy Framework Directive sub-regions.

The UK target for abundance was met for grey seals across their range in the Celtic Seas and Greater North Sea, where they have increased in number.

The UK target for harbour seal abundance in the Greater North Sea has not been met. In the Celtic Seas, the conclusion was ‘unknown’. Harbour seal abundance thresholds were met in West Scotland (Celtic Seas) and in the English part of the North Sea, where numbers are stable or increasing. Thresholds were not met in the Scottish part of the North Sea (East Scotland, Orkney, and Shetland), where harbour seal abundance has shown a marked and prolonged decline. A major research initiative is underway in Scotland to investigate the potential causes of the decline. While the causal mechanisms for the decline have not been identified, several factors have been ruled out as primary causes: fisheries bycatch, pollution, loss of habitat, entanglement in marine debris and legal shooting. The research will continue into the remaining potential cause. These may include predation (by grey seals and killer whales), competition with grey seals, and exposure to toxins from harmful algae. Elsewhere, the assessment of harbour seal abundance was inconclusive.

Determining the impact of human pressure is key to assessing progress against the UK target and to undertaking appropriate management if the target is not met. In Scotland, strandings of both species are monitored, and cause of death is determined., In Northern Ireland there is a targeted seal post-mortem programme in cases of suspicious deaths. There is currently no such monitoring of strandings in England and Wales. Such monitoring can be used to identify the causes of population change. It can help to distinguish natural causes such as disease epidemics caused by the Phocine Distemper Virus along with anthropogenic causes including illegal shooting, fisheries bycatch, and pollution.

* Adapted from OSPAR Intermediate Assessment 2017 on seal abundance and distribution