Since 2012, polychlorinated biphenyl concentrations in biota are broadly similar and generally achieve the target described in the UK Marine Strategy Part One (HM Government, 2012). 83% of the assessments in the Greater North Sea and 74% of assessments in the Celtic Sea have met the associated UK targets. However, the most toxic dioxin-like compound (CB118) still exceeds target threshold levels in some areas.

This indicator is used to assess progress against the target set out in the UK Marine Strategy Part One (HM Government, 2012), which requires that concentrations of the substances identified within relevant legislation and international obligations are below the levels at which adverse effects are likely to occur. The polychlorinated biphenyls considered are CB28, CB52, CB101, CB118, CB138, CB153 and CB180.

In the UK Initial Assessment (HM Government, 2012) the key pressures associated with this indicator were riverine and direct inputs of legacy polychlorinated biphenyls arising from point and diffuse sources, atmospheric deposition and acute events that have entered marine sediments and can then accumulate in fish and shellfish and top predators (biota). These are still relevant.

There is a robust UK legislative framework in place for controlling and reducing pollution from the main sources of contaminants (energy production, transport, urban and industrial uses), including appropriate consenting regimes and River Basin Management Plans described in the UK Marine Strategy Part Three (HM Government, 2015). However, many of the polychlorinated biphenyls in marine sediments entered the sea before many of the controls were put in place and, due to their persistence, are still present. Removing these sediments from the sea is not a practicable option.

Status and trends assessments were conducted for the UK portion of the Greater North Sea and Celtic Seas Marine Strategy Framework Directive (European Commission, 2008a) sub-regions, and, where possible, at the smaller scale of the UK biogeographic marine regions set out in Charting Progress 2 (UKMMAS, 2010).

Risk-based monitoring and assessment of the status and trends of polychlorinated biphenyl concentrations in biota was conducted within the annual UK Clean Seas Environmental Monitoring Programme using methods and principles set out in the OSPAR Coordinated Environmental Monitoring Programme. The assessment analysed the results of individual monitoring stations and also synthesised the result to assess trends on the biogeographic regional level.

OSPAR also has a long term ultimate objective to achieve concentrations of close to zero for man-made substances in the marine environment, and whilst not a target described in the UK Marine Strategy Part One (HM Government, 2012), the status and trend results were used to examine progress towards this objective.

The UK has been a key player in the development, monitoring and assessment of the OSPAR “polychlorinated biphenyls in biota” common indicator. The UK results have been used in the OSPAR Intermediate Assessment (OSPAR Commission, 2017).

A number of samples exceeded the thresholds. These were local in nature and close to the sources, particularly in industrialised estuaries and coasts (HM Government, 2012). 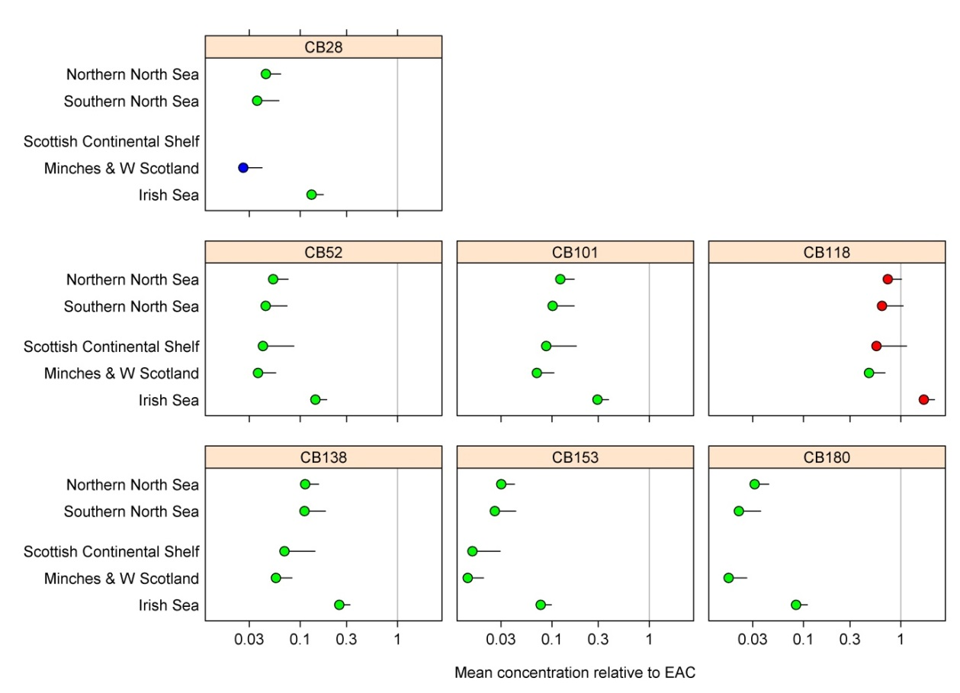 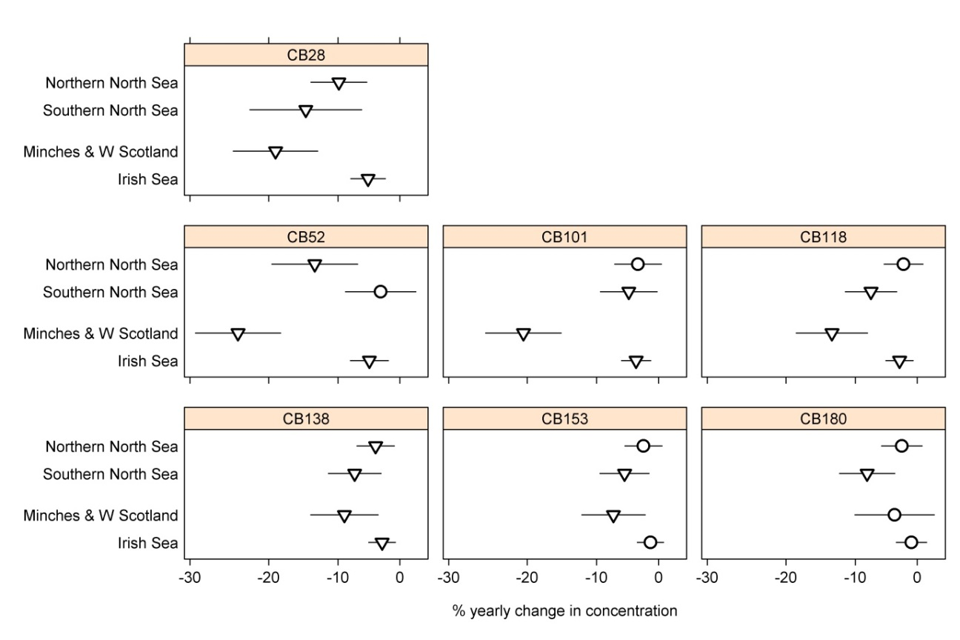 Since the UK Initial Assessment (HM Government, 2012) concentrations of polychlorinated biphenyls in biota have not changed overall for either the Greater North Sea or the Celtic Seas. A very high percentage of stations met the UK target for this indicator. The exception is one of the most toxic polychlorinated biphenyls (CB118), which is above the Environmental Assessment Criteria in 4 of the 5 assessed Charting Progress 2 (UKMMAS, 2010) regions, and therefore adverse effects on marine organisms may still be possible in these areas. Due to past industrial uses and the persistence of polychlorinated biphenyls it will take several more decades before concentrations in biota will disappear.

There is a lack of monitoring data, particularly in the Southern North Sea, Channel and South West of England. Filling these data gaps would provide a broader picture of compliance with the target.